Book of Lust
by kanashiipanda

A NSFW time-management/rpg/visual novel in which you play as Jake Hart; a somewhat average young man.  One day, he's given a mysterious spellbook and accidentallyreleases a succubus.  Embark on a journey of complete and utter degeneracy as you mind control, swap bodies, birth demons, and order your personal succubus to possess those around you.

There will be Male/Male and Female/Female pairings, but I wanted to try keep them optional.  You won't see any of these unless you actively start looking for them. 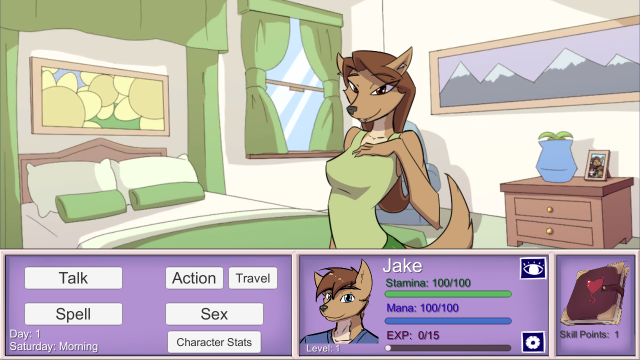 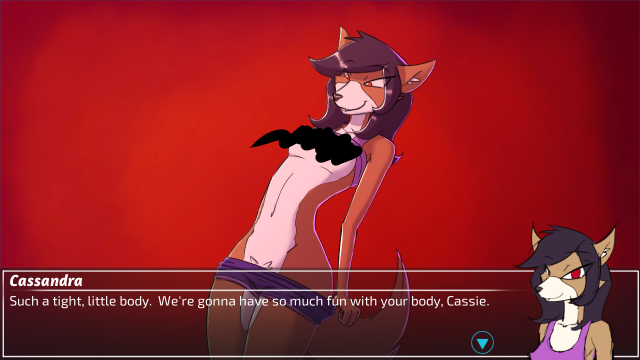 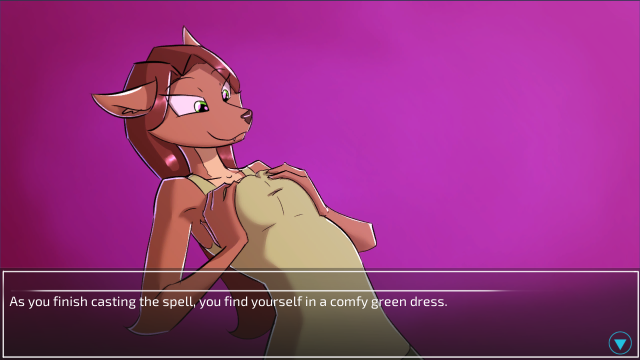 Most of what's available and isn't available to do is in the Read Me.

Use the Save Salvage Button incase I break the saves again.  Load up a broken save file, go to options and click the button.  It'll reset the game but you'll keep all your exp.

Assume the role of a wolf named Jake Hart.  A spell book falls into your possession and when you decide to open, you unleash a succubus into the world.  You deal with the consequences.  It seems as though not all consequences are bad.

Jake Hart - The protagonist and the current owner of the Book of Lust.

Cassandra Hart -  Your older sister.  Attends the university that Jake applied to.

Olivia Hart - Jake and Cassandra's mother.  Is possessed by the succubus when Jake opens her book.

Mia Woods - One of the Hart's neighbors.  Married to Donovan Woods.

Donovan Woods - One of the Hart's neighbors.  Married to Mia Woods.

Julia Woods - The neighbor girl.  Daughter of Mia and Donovan.

Succubus - Was released from the Book of Lust by Jake.  Both her true name and extent of her power are unknown.

-Lined and Colored Valerie's hunt scene for both the Aspects of Lust/Dominance.
-Added Variant to Cassandra's morning masturbation scene when Mel's having sex with Olivia on Sunday Morning if her Lust is over 70.
-Added 20 stamina requirement for bodyswapping back the first time with Caroline.
-Aspects no longer dispel automatically at the end of Chapter 1.
-Fixed talent tooltoop for aspects saying that "only one person can be pregnant at a time".
-Fixed some typos.
-Fixed pregnant Olivia being displayed during her Soul Passenger when Mel is having sex with Cassandra.
-Fixed some portraits bugs.
-Fixed seducing Cassandra as Mel mentioning that 'she has a boyfriend'.
-Fixed Caroline not being in her Dorn on Friday morning after completing Chapter 1.
-Fixed Succubus' sprite not unloading when walking in on Julia and Caroline's sex scene in the evening.
-Fixed blank screen showing when exiting Julia and Caroline's sex scene in the evening.
-Fixed Jake and Julia not having sex during the evening before completing Chapter 1.
-Fixed dismissing the Aspect of Lust, dismissing the Aspect of Dominance as well.

-Fixed Mel not appearing in correct rooms after certain interaction on his visit.

-Lined and Colored Olivia's generic Soul Passenger scenes.
-Rewrote some of Olivia's soul Passenger scenes to fit the new pictures a little better.
-Added new scene between Jake and Mia. Must have Dominate Mind Sex with her as Jake at Late Night.
-Cassandra now eats a turkey sandwich during her Soul Passenger.
-Changed Compulsion/Dominate Mind sex with Olivia and Cassandra to their respective bedrooms instead of Jake's while playing as Jake.
-Making Mia call Jake "Daddy" during their sex scene will raise Mia's minimum Inf with Jake to 40.
-Fixed having sex with Jake triggering Caroline's "study spell" dialogue during her quest.
-Fixed incorrect Masturbation scene when using Soul Passenger on Cassandra at late night.
-Updated Valerie's character portrait.
-Fixed black transitional screen not showing up when gaining EXP in G'nisi's realm.

-Changed Cheat button menu to have +10/-10 to stamina/mana.
-Fixed softlock when attempting to have Compulsion sex with Mia/Olivia/Cassandra without enough stamina while playing as several characters with no scenes.
-Fixed UI not dissappearing correctly when Caroline declines sex.

-Fixed some incorrect speaker portraits being displayed.
-Fixed incorrect camera transition color when having sex with Cassandra as Jake.
-Fixed a few typos.
-Fixed Caroline's "leave" timer not resetting when having sex with her after Julia's visit and after talking about the first Dreamwalk with her.
-Fixed Caroline's sex animation when playing as Jake not showing pregnancy.

Four years later and we're here! A full chapter and some change on top. Kanashii still doing all the art, and has some amazing dedication! You might want to consider bringing in some assistance with the programming if you haven't already; it could give you hours of your time back! If the finished product is anything like the content so far has me expecting it to be, this is a game I'd buy! Never give up!

Keep up the good work! I like where this is going, and it has a lot of potential! It looks like you've already crafted the framework for the adventure, so I now eagerly await to see what you fill it with. I've noticed a lot of great stuff never gets finished around here, so I'll leave you with some encouragement that I hope will help you in the tough times: Never feel rushed. Make your masterpiece the way YOU intended it, and never suffer from the fear that what you do might not be good enough or quite right. If you ever come across writer's block or a moment when you just feel like doing nothing even though you know you could easily be accomplishing your goals, just do a little piece for that moment. And then another small thing the next day. An additional drop in the bucket the day after, and just do that. You'll eventually come out of being stuck and feel better for it.

I'm saying this because I want to see this reach beta version, and then eventually even completion. I very much like the possibilities here!

1:this game is not a normal transformation. but its the best mental tf game.

2:the art for this game is buetiful and very well done. im a little let down on the large amount of missing or incompete visuals.

3:the story is a beudiful work of art. the emotion and relatablility of this story is awe inspiring. the story is both wholesome and very sexy. the emotion explored with caroline losing her family brought me more emotion, than any other tf or sex game.

end:in conclusion i would recomend this game to anyone looking for a story filled game with wonderful sex scenes

Lets get this out of the way first (as of version 71.1b): as a TF game this game SUCKS.

As others have mentioned there isn't much in the way of TF at the moment. A lot of the game is playing around with the spells that get from the succubus which can be enjoyable. however there is plot to be found and one part brought me to tears and I was really worried I would make the wrong choice.

the characters have enjoyable personalities(at least the ones that have been fleshed out) and their art complements them very well.

The art is what really drew me in, it's sexy and fantastic. I have been following this game's updates for a little over a year now, and haven't seen that much progress on finishing the art, eagerly waiting though! I don't normally play games on this site for the story (I'm in it for the smut), so I love the fact that theres a cheat button so I can just skip to the raunchy parts. Awesome game! Keep up the good work!