The Essence of Gender
by ugre101 Hello, I’m back again and plan to stay longer this time.

The game is a 3D sandbox game, quite bare on content atm.

Right now I have gotten the game to a point where behind the hood most things are working but not implemented so players can interact with it.

I have chosen to switch the game to a third person 3D style, as while I was experimenting with unity it was the style i liked the most.

For avatars I have chosen to use Daz3D while it doesn’t work the best with Unity(URP)  it is the best option I have found especially because Daz can export morphs so combined with blender, it allows the avatars to be transformed(gender, fat, muscle, pregnancy, vore). 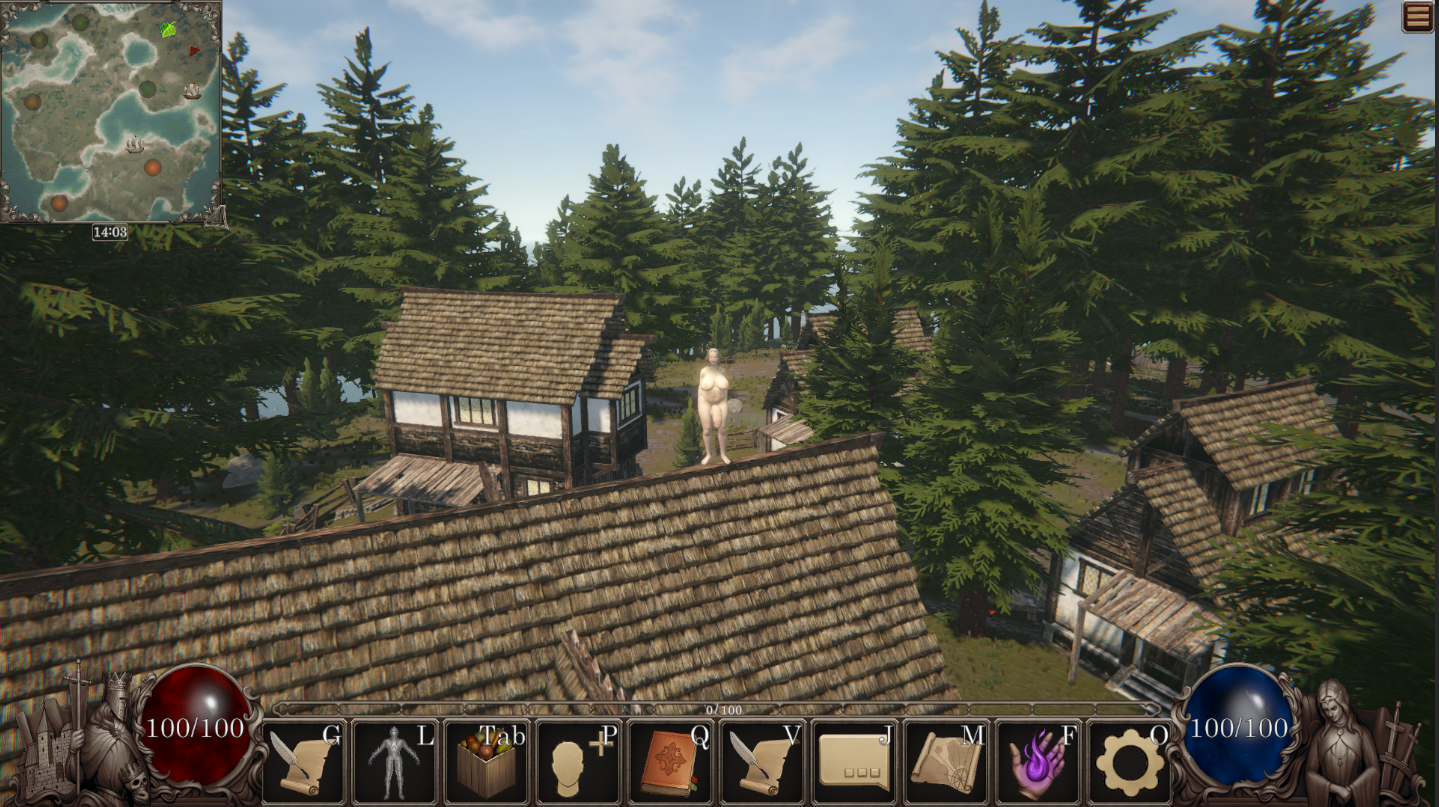 About GitHub I’m not sure what to do with it as right now the game contains assets I don’t own to share.

If you encounter a bug please report it to me, I try find as many as possible before build but it's hard to find them all alone. Also if you find some UI or similar annoying tell and I might be able to improve it.

I'm quite willing to concede that I'm not the greatest at responding to messages/posts and keeping up with different forums have become both annoying and time consuming so your best chance is you want me to suggest something or report a bug is to send it to my discord, especially bugs.

My game code, but only code not game assets as I can't share those.

Took longer than it should, avatars were initially a bitch and killed motivation but I have learned and managed to find & automate a better import path to add new and re add modified avatars.

Full game code can now be found on my Github, but all code & assets I don't own are removed so if you import the project to your unity editor there will isn't much of a game but you should be able to build items, scenarios, dialogue, quest, etc.. I'm in the process of "#define" out code that isn't present.

I have started using blender more to aid in importing characters from Daz and so far it looks a lot better, it is easier to add more and better lods now without adding too much to file size. I also hope to be able to add more hairstyles now when hopefully it won’t add 1-2gb per hair style anymore.

Avatar body morphs are currently  a bit limited in how much it changes for now as I learn how much I can change without breaking the animation skeleton and turning the avatar into a monster similar to the old claws bug I had earlier. I was reluctant to do a bunch of experimenting before as importing and setting up avatars was bothersome and could often end up taking a day, but I have now built editor tools to automate a lot of the setting making it a lot easier to test stuff without having to waste a dev day.

0.211
Some bugfixes
0.21
A bit of a mess as I caught some stupid virus(not Covid) that made me constantly extremely tired and headaches. So this update is probably doomed to have bugs or missing features from times my brain has been working slow, but so far in my testing I haven't found them. Biggest issues has been how incoherent the development has been due having to pause all the time when the headaches got to much and then restarting later, causing me to jump all over the place.

But enough with the self pity I'm getting better every day now and should be able to start picking up my slack and release a more polished update soon however if you can please download it can tell me where I have fucked up.

Added but not intractable

First update after the holidays and it feels as I haven't gotten into the rhythm yet, if I have messed up something tell me.

Added the dungeon it doesn't do much for now as you can only really send people to it and they don't even show in it yet, but I have gotten a lot of backend/code stuff in it done. So I believe there should be much trouble making the followers you send there so be present in future updates. For now it only makes the people you send there passive gain submission, but I have plans to expand and add features to it in future updates.

Follower titles have been worked on but I have nothing to show for now as I have spent my time working on the relationship system's backend, but I can assure progress has been made. I mainly need to figure how/when affection should be gained.

I have changed how the GUI for minor dorm building works, so now when entering the circle of kitchen or gym the GUI doesn't cover the entire screen and the game doesn't pause your game but your character will stop moving when entering a building circle and when you start to move again and exit the circle the GUI will disappear.

Organ morph perk, it still need more work but the basics functions of it works now, it doesn't work as other "digestion modes" as you start it during sex, can't be changed or stopped and max one prey at a time. And it's absorption speed is dependent on the size difference between your organ and your prey's mass and of course how much your organ growths is also dependent on said difference. I really need to start working on a in game help menu where I can post said math function for people that want to know.

In the process of added the new perk I had to improve a lot of the code for the vore system also I have started to move away from Enum's and towards so called magic strings as they seem to be better suited for expandability. While most the work can't be interacted with as a player at the moment there is some small improvements you might notice.

I believe there is more that I have done but as I didn't get it done before Christmas as I had hoped I have forgotten a lot of what I actually have done...

As title this update is only necessary for those with the movement bug also I can't promise that it fixes the bug, but it does remove possible causes.
Also for vore I have changed all other vore types over to new digestion mode toggle on the backend so if you load a save you need to re choose correct mode as it will have been reset.

Added but not working

As always if you encounter a bug or something doesn't behave like you would like it to please tell me.

I have spent some time reading the e-book released by unity on performance and using & implementing it's concepts and options to boost this games performance.

completing so I had to give up and switch back to mono. Ending up only succeeding in corrupting my addressable paths so end result was 1,5 wasted days without

Progress have been good, but given my nature to work best when I'm jumping between stuff this update have nothing big but a lot of minor new stuff.

I have also started using backtrace in my project it's a professional bug reporting solution to auto report any bugs that crashes the game it should greatly help me combat bugs.

Worked on but not implemented

Dorm; upgrades which allows your followers to

I really like this game, it shows a lot of promise. I played it back when it was still a 2D, 8-bit looking game, and it was still fun then, but I want to say great work on transforming it from there. The game definitely still needs a lot of work, but the foundations are definitely strong. There are a good amount of bugs at the moment, such as the saves not showing up unitl you quit the game (or not saving at all), body transformations requiring a reload to display, and a few others, and the graphics could definitely use an upgrade. But I think that with some polishing, this will be a great game.

I'm not exactly sure what the game is supposed to be about.  You start as some nude woman running around the landscape, and fighitng random people.  The fighting consists of either hitting a fight button or a tease button.  When you win, you can drain their masculinity or femininity.  I assume that if you drain enough masculinity, they become female and you become male.  I didn't play long enough to find out.  If you are defeated, you're treated to a screen that says that you were defeated and that consequences will be provided in a future release.

There are a couple shops that sell things like contraceptives etc and a gym that I suppose is supposed to let you exercise (but I didn't get it to work).

That was pretty much it as far as I could tell.

(0.043) I played the game about a year ago, and the graphics were very basic, you're a square on a 2D map, but the game was easily understandable. Now, you're just a picture of some random character sliding on the map, attacking other pictures, and the game is less than understandable because of aforementionned graphics and also because the code is broken, making the sentences into pure gibberish.

I had a good amount of time before playing that game, just getting as much essence as possible and molding people into what I want. Now it looks just ugly, and I don't wanna spend more than 5 minutes on it.

(0.161) The game has now nothing to do with previous versions. It's a 3D world with very bare-bones mechanics. I really don't like the direction this game has taken unfortunately, unlike other people, since I prefer text description over pictures and 3D rendering.

Definitely more game here now, i love where you're going with it!

0.11 review
An impressive concept! I really liked the previous game's mechanics, and if you're able to sort out the attribute stealing stuff in unity thats going to be amazing.

Interesting technology demonstrator but without a story it's not much of a game.  There is potential for something fun here but it's not there yet.