A strange, glowing pink meteorite has crashed down near Fox City, bringing with it some unknown entity that is transforming the locals into voluptuous women intent on spreading the infection to every corner of the earth!

As an agent of Center for Transformation Control and Prevention, you are tasked with collecting samples of a meteorite that crashed down Collect samples and dodge the bimbies (bimbo-zombie) to assist the Center in developing a cure. But be careful: every time the bimbies catch you, you become just a little more like one of them! Play as one of six different Agents with unique special abilities abilities. Can you stay yourself and devoted to the mission long enough to end this Bimbie invasion--or will you succomb and join their ranks?

Play as a Bimbie to convert and command your fellow infected to transform whole towns and cities--but be careful, there will be Agents you must overcome, lest you be struck by one of their magical firearms and end your invasion as a squeaky lovedoll! There are four different Bimbie playable characters, each with their own unique abilities.

In contrast to previous works of mine, this is a an action-driven short game that rely on your timing and reflexes--and a bit of luck--to avoid infection.

This is now version 1.0.0 of the game which means all the goals of the game have been met and we have moved on to future projects. However, we do plan to continue supporting this game in the future with bugfixes and potentially further playable Agent and Bimbie characters, along with a possible third game mode, so this game will remain officially in "Beta" mode here on TFGS.

If you'd like to support our work, consider donating at our Patreon, https://www.patreon.com/BlueFairyMediaGames . [Note that while the Patreon states it is for the previous / ongoing project Exile of Aphrodisia, the proceeds raised will also be used for this game and future projects.] 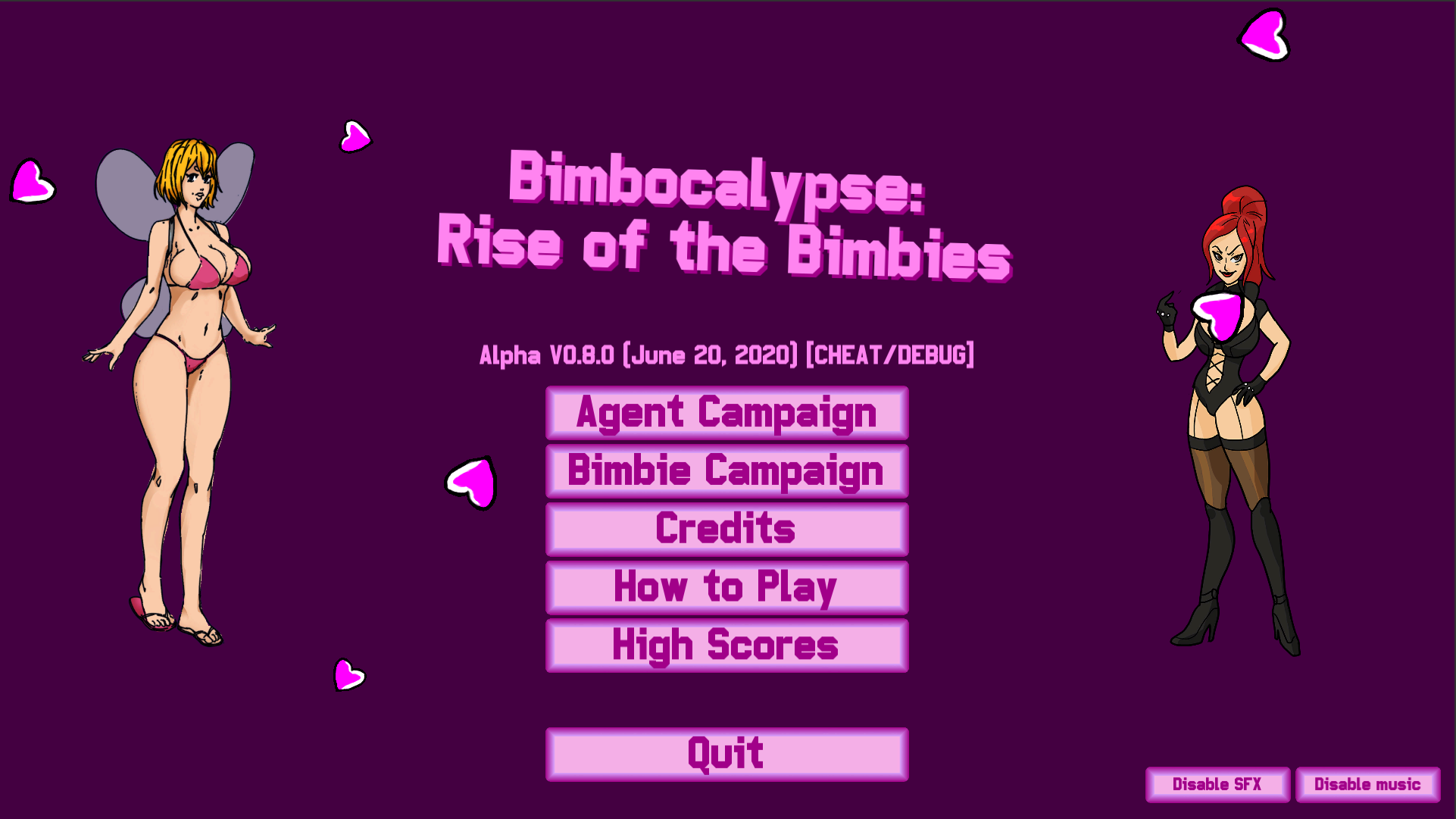 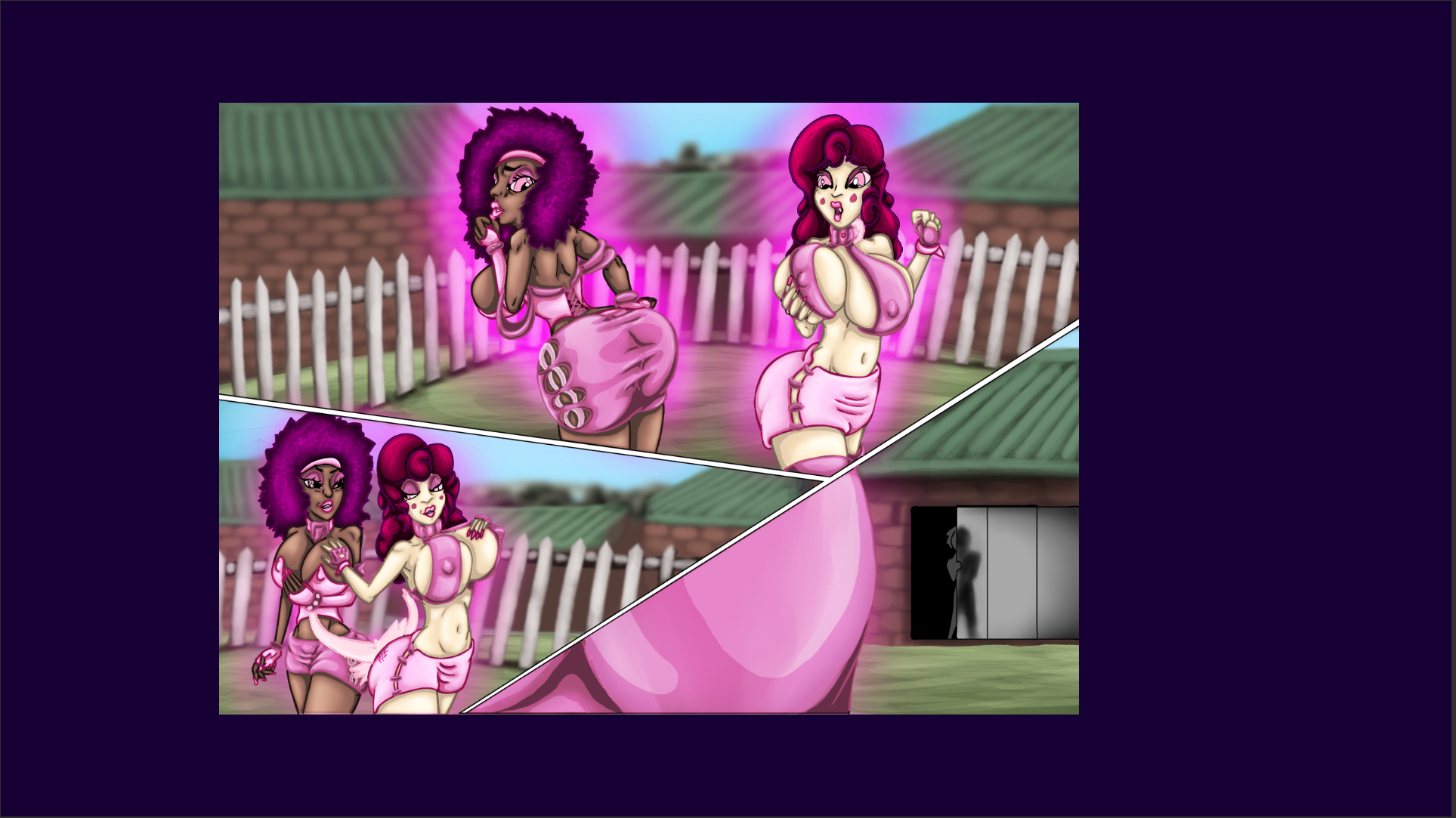 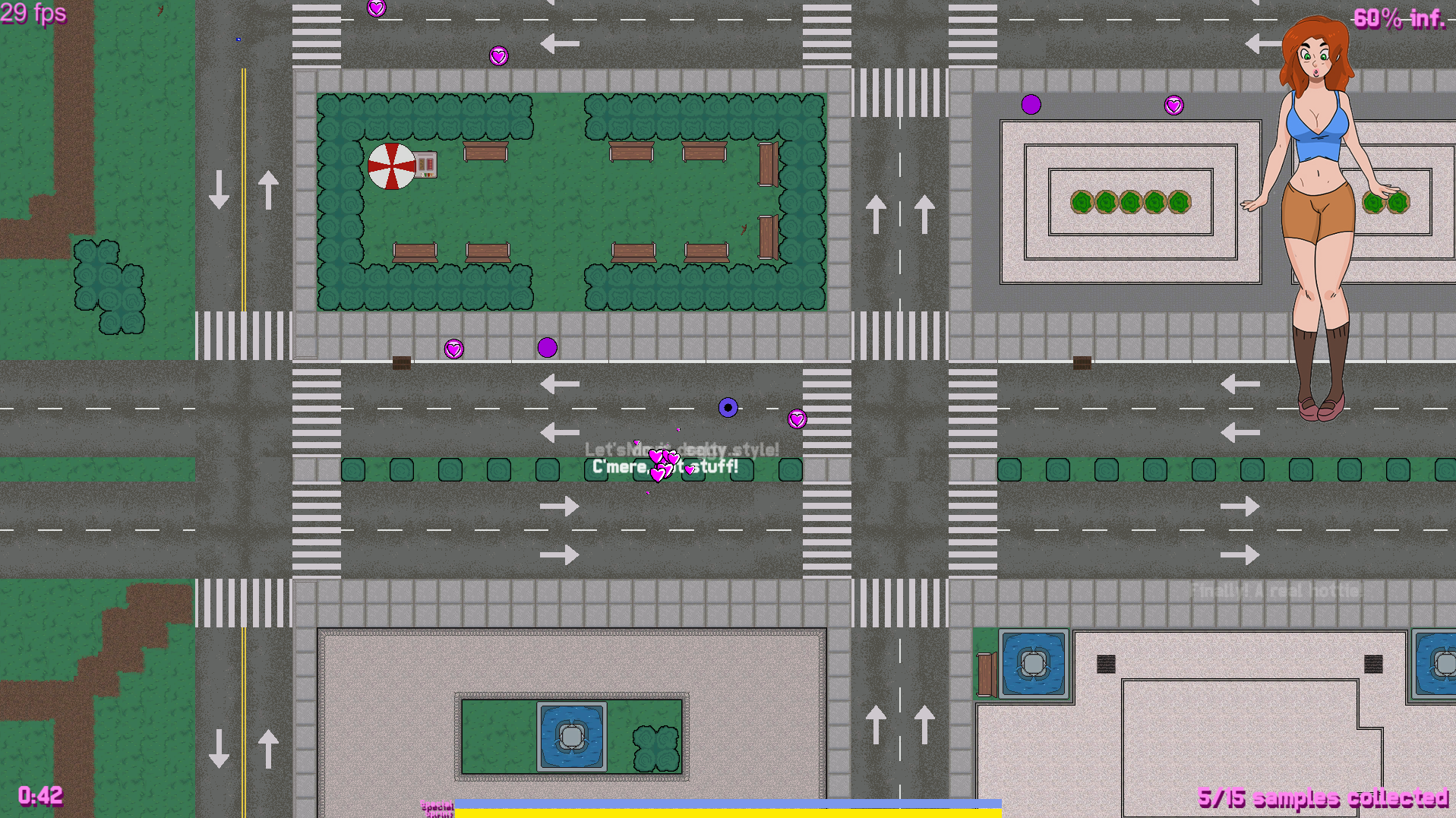 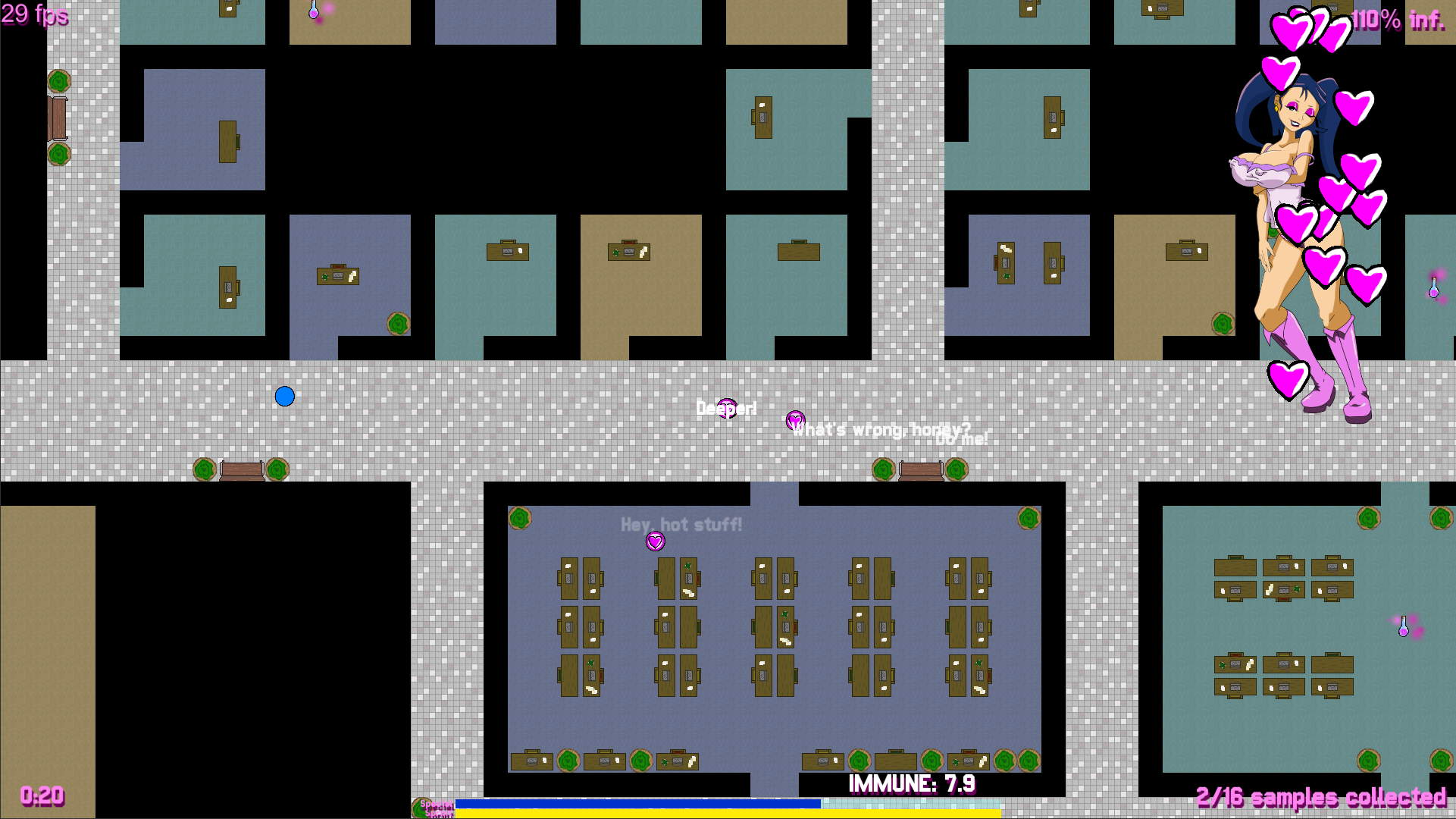 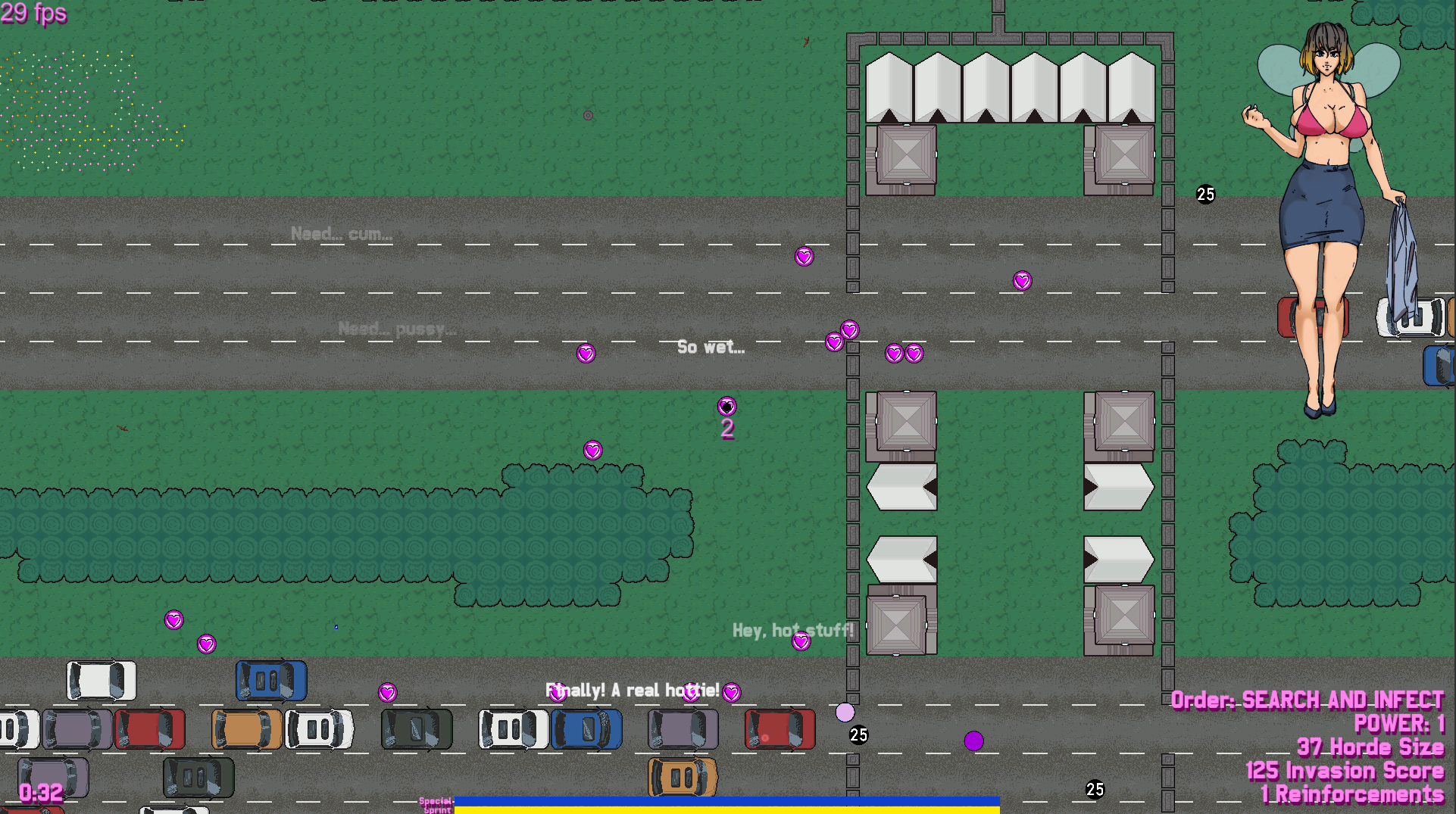 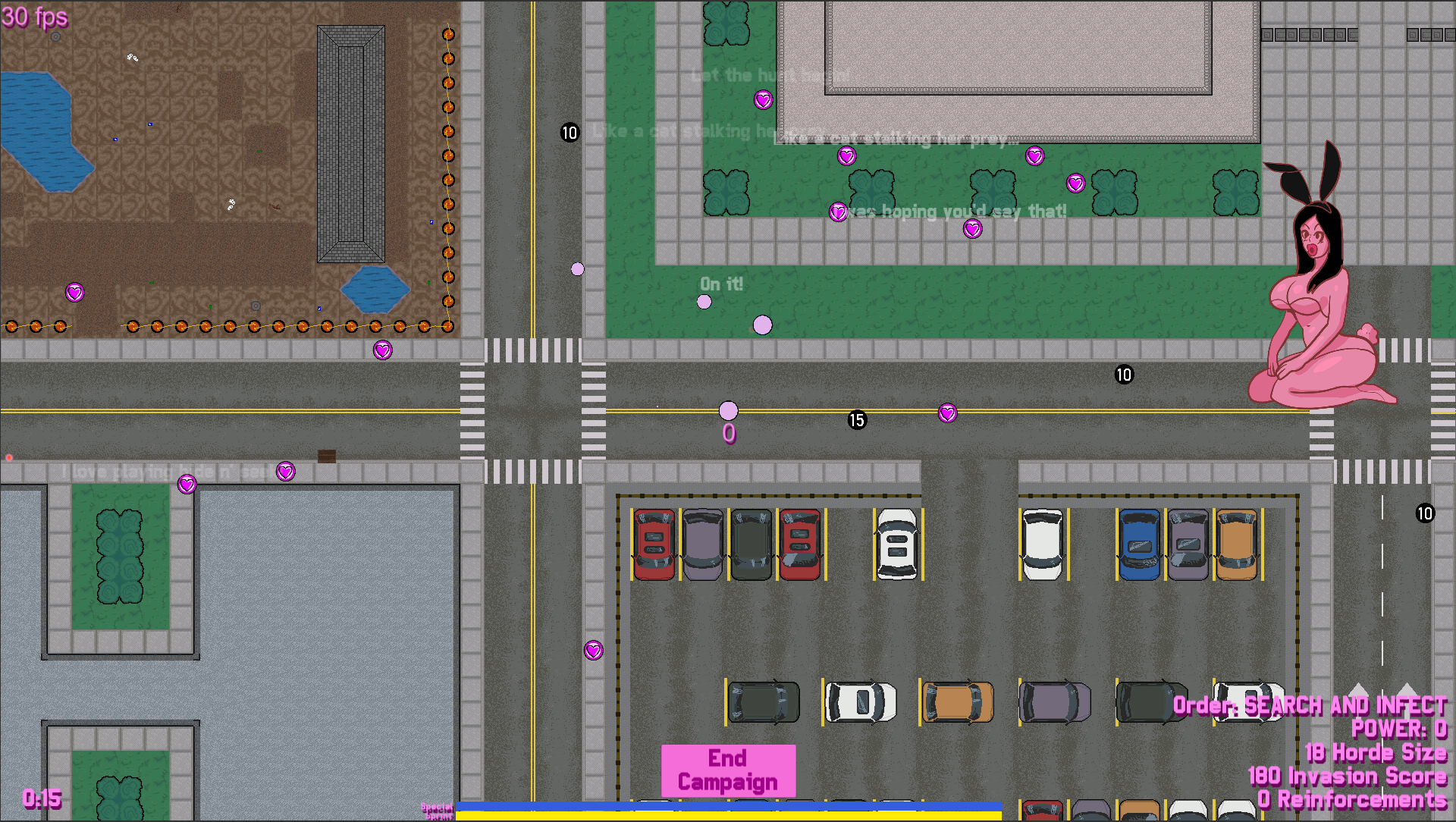 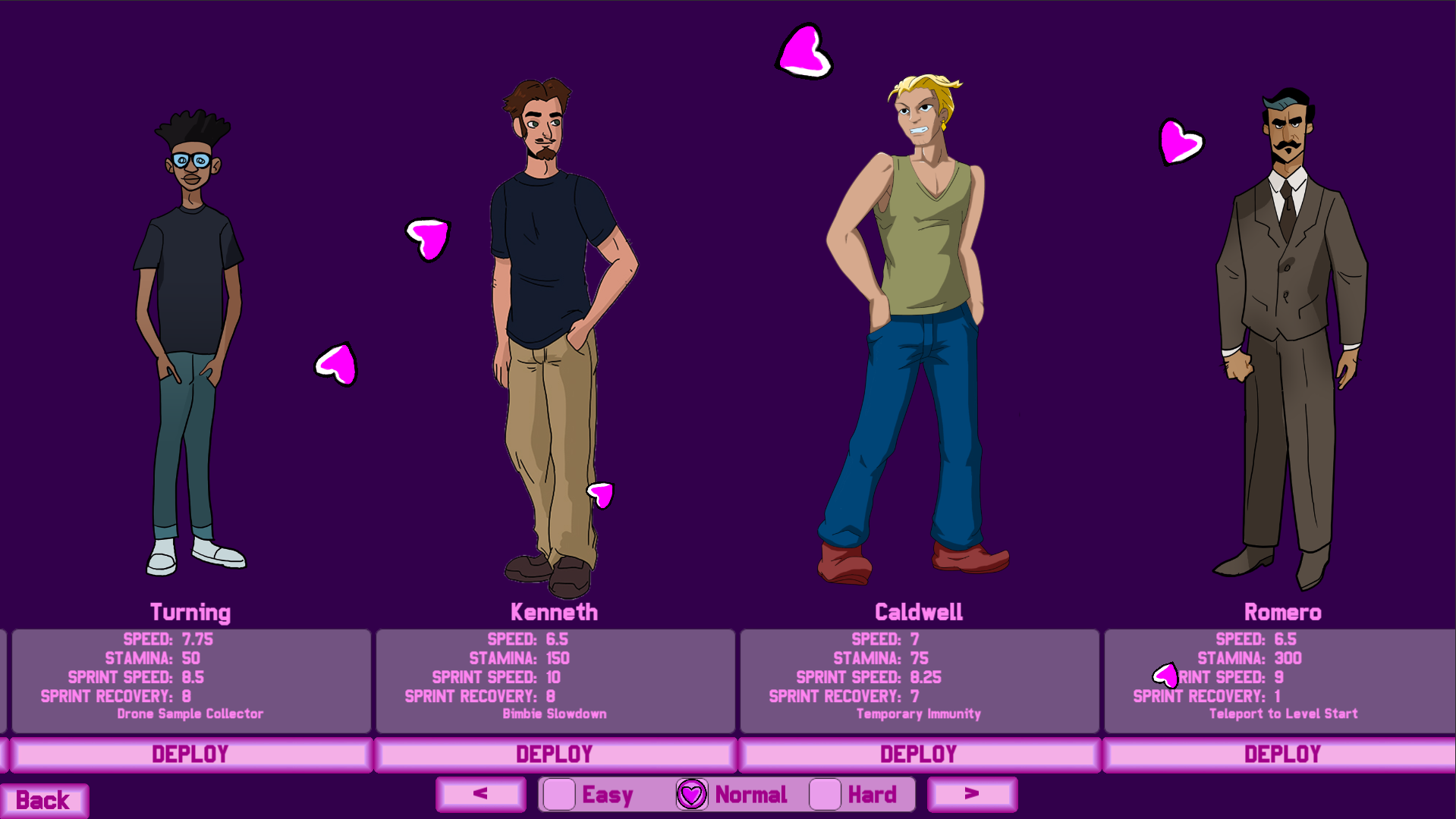 Agent campaign:
- New agent, Turning. Turning has a very fast base movement speed but cannot sprint much faster or for very long. Turning's special ability is deploying a drone that will retrieve the most distant sample and bring it back to you. Artwork is by Darkoshen.
- Agent Kenneth has a slightly faster base speed. Additionally, his special power has been changed to drastically lower all Bimbie movement speed for 10 seconds instead of his old ability of replenishing stamina and spawning more stamina-restoring pickups.
- Fixed a collision issue on the third Agent level.

Bimbie campaign:
- Added new Bimbie character, Beatrice. Beatrice's special ability is to double the speed of all Bimbies on the map for ten seconds, yourself included. Artwork is by Nooken.

Both:
- Added an 18+ verification splash screen upon game launch
- Playing around with some visual styling on the main page buttons. Giggles now play when selecting most menu and back buttons.
- Trees have a darker outline
- You can now see High Scores straight from the Main Menu and choose between Agent or Bimbie game modes, as well as Easy, Normal, or Hard difficulty levels.
- The game difficulty now determines how filled your character's Special bar begins. On Easy difficulty, it starts out full, on Normal it starts out at 50%, and on Hard it starts out at 0%.

The game actually has a pretty interesting loop to it, with a couple issues.  One: the graphics aren't intuitive.  I wasted a lot of time getting stuck on trees I thought were bushes, houses that looked like parking lots, and fences so thin they didn't look much like barriers.  On the opposite side of things the sidewalks look a lot like walls, meaning I instinctively avoided areas I could get through.  Some of the map designs feature dead ends that need to be braved for samples.  The game warns you about them, but they still feel unfair.  Immunity is hard to like since it has to be used the moment you pick it up and only lasts a few seconds.

The art is cool.  The transformations are something I looked forward to.  I do hope there are future plans for the in-game sprites to look more appropriate and maybe get some art for narrative descriptions.  The controls could be made a liltle more streamlined.  I'd like to play this one-handed if possible.

I actually think this could be really cool, but it's held back by some issues that could easily be fixed.

The new artwork is even better than before, the new character feels right at home among the other two, and I appreciate the counter that lets me know how long my immunity will last...but I really miss being able to control the action with the arrow keys. Using WASD is just so much clunkier.

This was fun to play, went through all three characters and got further with each one. It does get surprisingly hard, more than what I expected, I think the furthest I reached was mission 8 but I'm sure if I try again I'll get further. obviously, I also enjoyed the slow transformation of each guy to Bimbo, the art was good if a slight issue on their outside lines with the game. It be intresting if something would happen the more infeced you'd become, like in the text saying the Bimbo's were faster the higher infection score you had there's be a slight increase to speed and for the high leves you'd accidently infect other people so you'd have to plan around the civilans. I reccomnd this to anyone on TFGS. It's short and sweet with a good challenge to it and more to come.

Just awesome. This game feels like a very fresh idea.

I would love to see the transformation being a bit less linear and a bit more story. Maybe when you get hit there could be little story bits.

But the idea and the first version are great!

Best part of the game(being transformed) gets you a game over. Lame.