Downloads
Hummingbirds
by logan.scodini (11 more by this author)

Sometime in the Near Future

Scientific breakthroughs and geopolitical conflicts have rocked the world these past few years. Fortunately, you have enjoyed a relatively peaceful life as of now, far away from trouble.

That is, until one particular morning, when someone decided to annoyingly knock at your door…

Hummingbirds is an adventure/romance game novel for adults; you will create your character and control its actions in a realm ruled by money, danger, and seduction.

This game is distributed as a Web App; it is compatible with the browsers of any device (mobile or PC). Please visit the Instructions submenu of the Game Options for more information about this, including saving your game on Cloud Storage.

You may also change the appearance of the game and sound options in the Game Setting submenu.

Hummingbirdswas designed with the Twine engine (twinery.org), and is based upon the Sugarcube game format (by TM Edwards).

This game is solely intended for the entertainment of a mature audience; it contains graphic description of violence and sexual themes. By clicking on the following links, you confirm that you are authorized to access such material in your current location. 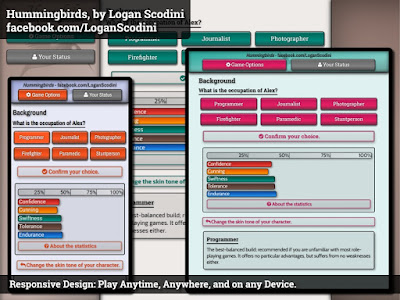 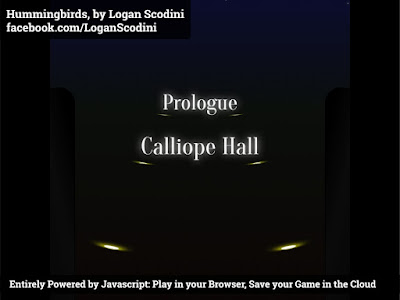 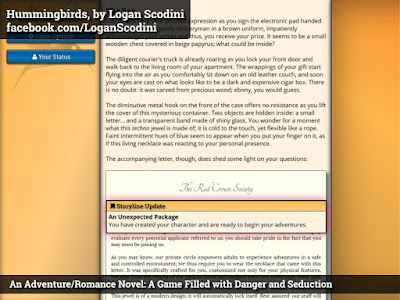 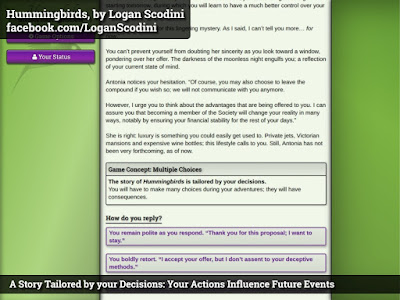 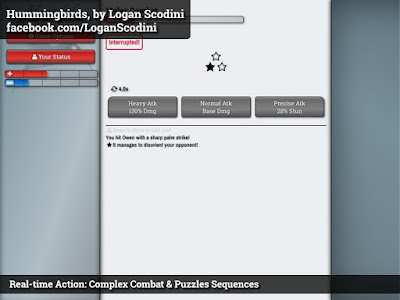 Good- great Storyline & Plot, very good attention to detail & decriptions, good spelling & grammar (a few errors i saw in grammar, but nothing major), fairly detailed characters which ye could get to know somewhat & feel somewhat for them, good mechanics, the option to make the fights easier.

Bad- Not enough player customization (the game says in the beginning that ye can customize your character.  But then when ye get to the point where ye can customize your character, the only thing ye can customize is your hair color & hairstyle which is a huge let down), The timer on the picklocking events kill the fun of it because they make it too difficult to do & ye end up having to restart so many times till ye get it correct that it takes all the fun out of it (if i had a choice in it, then i would completely remove the timer from the picklock events since ye already have to take time just to do a trial & error to figure out the correct sequence to begin with so that alone puts enough difficulty into it without the timer adding even more difficulty to it)- i really enjoyed playing the game & it had me hooked from the first page, but i quit playing at the picklock event where ye are trying to escape a cell ye are held in because the timer just takes all the fun out of it & just frustrated & irritated me to the point where i didn't care to play it anymore.

It's a great start to what could be an epic CYOA Game, but to be anything other than "just good" ye should really consider removing the timer from the picklock events.  I'd certainly plain it again (& probably through to the end) if that event's timer was removed.  Though i would reccomend to everyone that ye give this a try, it's not really TF-based.. but it's still a good game that will definitely capture & hold your attention.

Great game, but could be better if the creator would include things like difficulty levels or a debug mode because people like me dont want an unnecesary challange or to waste time that alone made me quit the game half way

I played Collared Prey before and I can see how you've taken that premise to a whole new level with an incredibly engaging story. I played through the first chapter so far and I could not tell what was going to come next after every scene, and when I thought things were going to a totally new direction I was surprised yet again.

One criticism I will offer, though, is that a certain sex scene between two pairs felt a little forced and unnatural. I can tell there's a far greater emphasis on story than smut and I don't think you should feel compelled to add the latter, especially with all of the possibilities at the table.

Of course, that's just my opinion, and the rest is written better than anything I've tried before so I'm no expert.

I'm still enjoying the battle system and the cowgirl with the lasso now doesn't seem to be as much of a canon-sue with the Random Number God luck. Can still be tough, but not insanely so.

The new additions to character customization are a nice touch and seeing the start of the prologue is promising.

Please keep up the good work.