Hard Times in Hornstown
by Unlikely

Hard Times in Hornstown, possibly the largest fetish-themed text adventure on the internet. It has more than 13 million characters (2.6 million words!) worth of handwritten scenes and code illustrated with more than a thousand high resolution images and a player avatar which dynamically changes according to your choices. And you certainly won't be lonely, not with our 300 NPCs to meet, and greet and do kinky things with.

The game is complete at this point but will continue to be expanded with new content indefinitely. Hornstown receives at least 200 000 characters (40 000 words) of new content each month without fail.

Patrons get big content updates 1 month earlier and get extra character customisation options at the beginning (they can start the game as a woman and a few other options).
All these options are available in-game for any player.

Starting from January 2022, people can also support us directly at https://hornstown.com/crypto 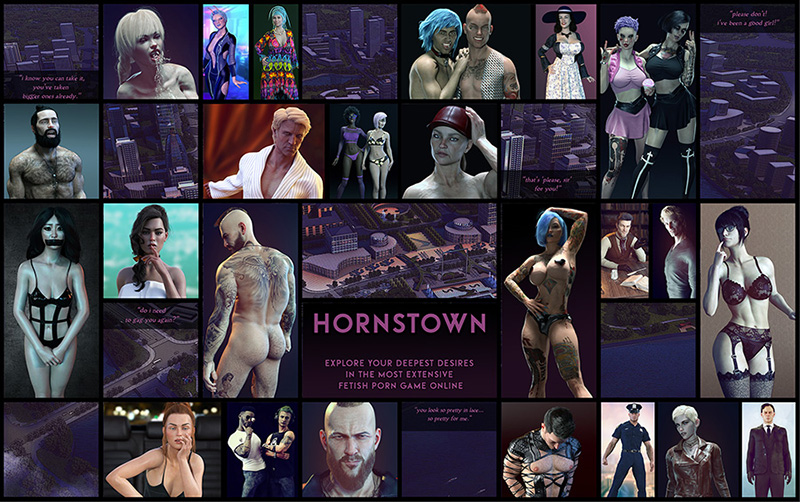 280k new characters, 20+ new images, a new money making opportunity and a new transformable NPC
Try your hand at busking, attracting a crowd and even a mentor on the streets of the city!
A new NPC shows up at the EC club on Saturdays, tame their wild tendecies to turn them into the sexy beast you want!
Light D/s content, exhibitionism, voyeurism, bodily transformation, crossdressing, vanilla sex and more!

Start as a stereotypical boring everyman and get involved in events beyond your wildest and kinkiest dreams !
Transform your character in a myriad ways as you meet and and get involved with the countless friendly, nasty, sexy, aggressive, submissive, weird and beautiful NPC dezines of Hornstown!

You can see the detailed changelog on our Patreon page: https://www.patreon.com/hornstown

Pros of this game:

- Wide variety of fetishes. While the main focus does land squarely on sissification or outright MtF transformation alongside submission, there's a whole heap of other options to explore. Initially, it's harder to start a game as a more masculine and more dominant character, but many routes do have options specifically geared towards these types of PCs.

- There's some hot stuff here. Despite some fetishes falling outside of my usual preferences, the NPC renders can be really hot and the antics that you the PC get up to can be delightfully dirty. Really fun.

- Lots of content. If there is anything in this game that you find interesting, check the walkthrough on it, because odds are it expands into its own storyline with multiple branches and outcomes. Some characters are nothing more than one night stands, but other characters enter into relationships with the player and their attitudes and sometimes even appearance may change depending on your own choices - some with a lot less leeway for error than others.

Cons of this game:

- The core gameplay loop isn't super fun. Work provides a very low amount of money (50-100) compared to the cost of actually interacting with elements in the game. The camwhoring profession is an exception to this but even it is gated by extremely low initial rewards and the amount of in game time and effort it takes for it to establish itself as a high earning powerhouse.

- Writing and code can both get messy at times. Older routes feature significantly subpar writing compared to newer ones, and some routes can glitch out and break mid playthrough. Additionally, loading an autosave or a new save can sometimes create unexpected mix ups with what is currently being rendered in the game's code - this can lead to characters instantly rejecting you or closing off storylines, or worse yet lead to bad ends when the game's internal data is so confused it thinks you've skipped a full day of gameplay.

- Slow on browser. The .exe itself actually runs quite smoothly, but the game online is very laggy and is quite frustrating to play.

- Player character looks significantly worse than the other models in the game, and hair colours other than brown lead to the hair being set too far down the model's head.

Overall, if you're willing to put up with the bad, this game has an incredible amount of content. It can test your patience at times, but I find myself returning every couple of months to explore new routes and sometimes redo the old. I very much enjoy Hornstown, flaws and all.

The game has 3d renders for various scenes, the characters, etc, so visually, it looks great. The various storylines one can take are well-written, and almost free of typos. In any case, be it visual or text, the content is there.

My biggest problem is the paid content pushing and advertisin. I'll start with the latter: the advertisements are always on, even in the download version. This is a problem if you're on a data capped connection, and there is no way to turn them off. The former problem is the obnxious textwall of "this content is available on Patreon" in the various in-game pages.

Monetizing content is fine. If you're giving us a free demo, just put your Patreon link in the intro, having it everywhere at all times is just annoying, and takes up precious screen real estate.

One half of it is paywalled, the other isn't very interesting. For being the most "complete" life sim on this site, it certainly doesn't live up to expectations.

Long story short, there is a ton of content in this game, but you really have to work for it, especially if you want a specific outcome for you character's appearance/personality. I don't love the core gameplay loop of managing time and money, but if you're willing to sit through that, there is plenty to love.

+Vast amounts of content, with pretty decent writing throughout

+Great variety in character customization, allowing you to be male or female, submissive or dominant, with content to support each (though I feel content caters more to submissive types)

+Decent overall look, aside from the UI. Well designed overworld map, and 3D chracter models that don't look like gremlins.

*Plenty of failure states. If you actually want to stay afloat, you'll have to spend time working, and be careful what you agree to. This lends a sense of real difficulty to this game, though also (arguably artifically) inflates playtime. More of an actual game than a sandbox.

*There is 0 linearity in this game. Your actions completely dictate the direction of the story/character, though you may not necessarily know what direction that is. This makes the game feel pretty free, especially with the amount of content, but early on can also make it feel kind of aimless.

*No clear objective. Aside from "don't go broke," there is no major objective handed to you from the start, hardly even any exposition is given to you. The game kind of cuts right to the chase and lets you loose in the world/map.

-Pretty grindy. It is a time/money management game, so that's kind of how it works, but you are not totally free to do whatever you want, because almost everything costs money, and there is a daily upkeep. Having a job can take a lot of time out of each of your days, and hitting 0 money is game over.

-Paywalled content. I didn't actually notice too much of this, but it's there. The game also has a giant banner ad for other games at the top of it at all times if you're not a patreon backer.

-Kind of messy organization of UI. Far from the worst I've seen on this site, and visually it's actually decent, but it can seem a little tossed together at times. aside from the very nice overworld map, and the little character model preview on the right, it's just lines of writing/dialogue with hyperlinks on them. The starting room in particular feels a little disorganized once you unlock several options.

Somehow I always return to this game, sometimes after a long hiatus, but it always has a metric shitton of new content to it. The new stuff with the biker dude is right up my alley and all the new, more subtle D/s stuff is great too. Truly one of the best games on this site!