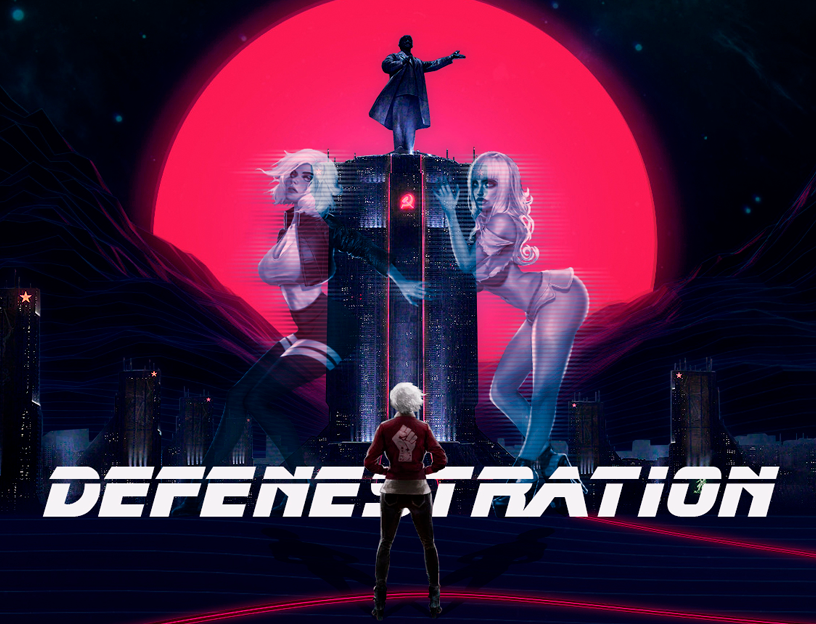 Defenestration is a parody/satire/comedy rpg, set in a futuristic soviet union. The player takes up the role of Kira, a young promising girl fresh out of school. Help her get on her feet in unfamiliar megapolis, dealing with various day-to-day problems and ridiculous characters. The game is choice based and has some open world elements.

We took good old RPG Maker and removed everything that was annoying about it - No combat system and no grind.

Defenestration is also a “body mod” game, meaning that you will be able to pick how Kira will look through your ingame actions, our goal is for every event to show every part of her customizable appearance (breast size, tattoos, piercings, lip size, hair etc.)

We treat our text the same way - everything is tied to your stats, choices and previous encounters.

Most of our characters are absolutely insane, and their insanity may stick to your Kira and lead to her losing a couple of brain cells, so you have to be careful with who you talk to and what you drink.

As you can imagine, our goals are pretty tough to achieve, but we’re doing our best to deliver, and with each update our game gets closer to perfection and we, ourselves, are getting closer to defeating the Huns!

Thank you for your time! Consider joining us on our quest of defeating all the Huns and creating the best game possible!

Without revealing too much of the plot, here's a few words about the game.
Defenestration is set in a futuristic soviet union, the player takes up a role of Kira, young promising girl fresh out of school. Help her get on her feet in unfamiliar megapolis, dealing with various day-to-day problems and different characters. Some will try to help you, some to corrupt you (mainly the second one). The game is planned to be choice based and semi-open worlded.
Which means no combat system. (Yay!)

This update has a lot of art and the longest event up to date, you will be able to choose from Bimbofication, Slutification or you’ll be able to customize her completely by choosing whether or not she will become dumb, pink haired, busty or have enlarged lips.

For the last options you’ll need to interact with five objects within this event.

We’re currently busy with the rework, and this is step one out of three.

New artwork for Kira (preview, it’s not fully done yet.)

Random event submitted by VonDoom (Thank you VonDoom, very cool) It has three stages, last one was written by me, is repeatable and so far has four random variations of it (different text).

Requirements: Chief Officer’s hypnosis, have third breast size. You can avoid this requirement by using our usual trashbox in the subway (picture below)

Third - at the changing room (tailors shop), to see all four versions of it you’ll need to sleep and talk to her again. But, they are randomized, so you can just save and load instead.

The event was written for Bimbo Kira, I’ll either edit it in the future or I’ll write something else for non-bimbos.

I intend to advance this random event and it will give you random benefits like items and stats.

Kira appears naked in this event only because the new artwork for her is still in the making.

Trash box in Metro station now gives 10 Fame, which is enough to trigger a new quest (through new diner job or Shwift’s terminal messages). Quest will lead you to the new location (access through the Slums bus stop).

Park exposure minigame. (You need to complete all four hypno sessions with Chief Officer and then go to sleep, new events will be added to it progressively)

Patriot outfit (third one from the last outfit poll, you can buy it at the Mall).

Ability to walk around topless (Rebel, Patriot and Casual “Ghost cut” outfits, unlocked by one of the npcs in the park minigame ).

KGB Agents will attempt to arrest Kira if she walks around topless.

New lower back tattoo (You need to get arrested, speak to one of the inmates then; Events that show this tattoo right now - dorm shower, pet training and bobby park event).

“D” button now shows Kira from her back (only naked for now).

Reactions system - Npcs are now able to recognize what Kira is wearing and if she has a tattoo shown (Now I only need to write text, it will be added automatically).

Sanctuary (Rebel’s base) was advanced further, you can now use the sewer boat to access Shwift’s base.

New side quest with an H-event attached to it, you can access it by using a terminal at previously mentioned Shwift’s base.

New outfit, with stages, same principle as Patriot and Ghost cut outfits. you can buy it at the mall.

Mini-event related to Shwift at the “new you” facility, you can access it by clicking on a terminal behind the reception. (Will be moved to a different place)

Option to sacrifice Katya at prison now has an event attached to it.

Memory training now has a “Katya’s punishment”, regardless of what you have chosen, just for this update.

Added another floor to the facility, temporarily.

This update mainly focuses on Katya, her dialogue should work now.

There were a lot of bugs this time. Hopefully they all are fixed.

Minor art things, that I’m not including in Major.

You don’t need to replay the prison part. You can see everything in the “New You” facility. The dialogues don’t change that much to validate a new playthrough.

To access new content - talk to the information lady after “prison break” quest, she’s at the Library .

Fast travel - unlocks after initial introduction to the “rebel’s base”, use sewer entrances.

You can now change narration during H-events from second person to third - use Kiosk at the Hospital area to turn it on/off, I moved it closer to the hospital entrance.

Two new outfits: uniform from hypnosis, and winner of the poll - you can get it at the rebel’s base, I have plans for it in the future update/updates.

Two new quests, one is completely finished and another will be advanced with each update.

Three new events, accessible right at the end of this update. Two of them are hypnosis related and the third one is a BE (Breast Enlargement) event, not related to the Bimbo route (but stackable with).

Overall there are 28 new busts of Kira, with bigger breasts. And here’s the list of events that got an updated art because of the BE scene (Park, Dorm Shower, Tunnel, Subway)

Save before the new BE scene, it has a chance of not working if you choose to get paid instead of paying for it (Don’t grind for it, it has the same art and dialogue in both cases).

There is a new item “Jammer” it will show alternative dialogues during new hypnosis events in the NEXT update, it doesn’t work yet (Again, don’t grind for it).

New quests lock old Hypnosis events, so if you haven’t seen them on your current save and want to have their consequences - do them before new content.

Known bug: Katya’s new dialogue does not appear properly, but it’s not game breaking and you can still proceed.

There is a lot of stuff going on behind the scenes in this update, be prepared for some bugs. Save often please.

Due to some changes in code - your save files won’t work properly, events and dialogues won’t play out “the right way”. Please start a new game, and save often.

Rework of variables and stats

Rewrites of some events

You can get another jacket at dorm (second floor, wardrobe), after completing “Suit up” quest and talking with “Tolstoy” again.

You can change between cuts of your “casual outfit” for 5 rubles at the tailor shop.

Started adding reactions to some npcs (to Kira’s tattoo, her outfit).

Advanced Hypnosis questline (you need to sleep between your sessions).

Some not H-related art. Just to add to the story.

I’ve made some questionable music choices. sorry in advance, I couldn't help myself.

Some tiles are no longer walkable and vise versa

Advanced the main storyline (Interact with the factory guard).

Advanced Hypnosis questline (you need to sleep after your first session).

Implemented the tattoo system (current and future tattoos will be shown in events).

Added Map of Moscow for all lost souls out there. You can get it near metro entrance at "Hospital area".

You can now step over the cracks.

The game no longer crashes when you interact with hospital door.

I've been on the site for years now and yet I've only left maybe a couple of reviews, but I simply must for this work of art. Defenestration is simply incredible. The art is fantastic, the concept is original and clever, the writing is a great, with wit and humor in healthy doses all over. Honestly, it's a unique piece of work that the creator genuinely pours themselves into, both as an artist and programmer. I give it my highest recommendation.

Pretty good, especially the art. What is mostly missing is content, and especially small content to keep you entertained while searching/progressing, small random encounters, small events, events variations, especially on repetition... But what's in is pretty good. Lack a bit of variety in sexual acts (didnt see anal), and rpg maker is kinda annoying with long break-up dialogues (hypno sessions are fun, but having like one minute of spamming skip just to get to new content is really annoying). Yeah I'd focus on small event/quest to make the game feel less empty, I had the feeling I was walking around a LOT for not much, especially when you're not sure where to go, and you often feel a bit railroaded. Oh and remove the damn party quest if you can't do it, I checked the store regularly during half the game in hope I could get booze.

I've played many RPG Maker games. Some are good. Some are atrocious. This one is fantastic. It's simple, but also fairly detailed. Your world is a beautifully disastrous one, and I love every minute of it. Even if it wasn't an adult game, the game stands on its own very well; a feature that many adult games lack imo. Also, the references are HILARIOUS. I cracked up during the prison break sequence. Something that, again, many adult games lack; appropriate humor.

I love... A LOT about this game, but it seems like at some point, MF sex (even if it's just in the form of rewritten memories) might be unavoidable... and I really want to avoid it.

Jammer might prevent the current "unavoidable" MF sex, but it doesn't work yet, I think.

@Jeffy I can only write one comment in here, please post questions in a "discussion" thread. There is no grind, you can completely avoid waitress job by selling the jacket, the whole money system is there just to justify working. as for the prison quest and "new you", just look in the quest log.