Naked Ambition
by ApolloSeven (5 more by this author)

The king is dead leaving leaving a power vaccum in the kingdom. Help guide the Princess in her quest to get herself upon the throne. You'll have to manage her classes and personality as she tries to gain support. But be careful, there's dangers lurking everywhere and the Princess has a mind of her own.

Naked Ambition features a pixel art style inspired by mid 90's PC games as well as a unique semi-randomized gameplay style. What order events happen in and what decisions the Princess makes changes every game.

If you want to see what's planned for upcoming updates and track my progress, check out the game's Trello board

From there, to access the feminization content, pass the green checks in the scenes following the Princess's transformation.

.41:
Gameplay changes:
Added the ability to change the font in the preferences menu
The card removal screen now shows you how many of each color are in your deck
If you get the low affection scene in the council member meeting, the stat check is 10 points easier.

Bug fixes:
Fixed one of the stressed cards that the Vizier can add to your deck having an improperly initialized variable
Fixed a crash caused by missing gallery images
Fixed the philosopher court random event missing a background
Fixed a few errors in the demon tentacle scene
Fixed one of Amelia's scenes trying to have a non-existence stagehand talk to you. He exists now.
Fixed the Princess being able to choose a lesson beyond the bounds of the available lessons if she rebels and chooses her own lesson. That was too rebellious.
Fixed the summer random event cow decision looking for the wrong color
Fixed the Princess talking to a maid about her dick if she didn't have one
Fixed the talk with the Princess after the second meeting with Filbert sometimes showing the wrong conversation
Fixed Ulric's trap raising the Princess's political reputation rather than her sexual reputation

Added card combining mechanic to create dual-color cards
Added dual-color checks
Gallery expanded to 4x4 from 3x3
New main menu option, progression. This tracks storylines you've seen and in the future will allow you to change lessons between runs
Added player chosen lessons. Right now  only rest (which reduces anxiety) is available
Removed the sexual stats from the stats screen as they weren't being used
Moved the save erasure trigger to after the intro
Added ability to skip the intro on repeat playthroughs
There are now different portraits for non-named men and women.
Fixed the ball image in the gallery showing the wrong picture
After rejecting an action from the Vizier once, the princess should now be able to accept it when he tries again

Added the rest of the chibi animations for the Princes's lessons
Added 2 new popins for the Festival of Flowers
Improved some of the UI graphics
Improved the calendar graphics
Adelin's name is now displayed on the people screen. Just in case you forget
The dominant and submissive cards added on Evette's route have been changed from being unique to dual color cards from the system being introduced in .4

If the princess has more favor with four of the council members after the foreign royalty introduction, the conversation with Normand now reflects that

Gameplay changes:
Changed Festival of Flowers to allow the player to chose the event the Princess partakes in.
Changed the first conversation with Adelin from a "Yellow" check to a "Conversation 5" check
You can now force the princess to let in Cecily or not with stat penalties for doing so, like the vizier
Lowered lesson bonus from choosing matching color dialogue from 1.5 to 1.4
Choosing the pink dialogue option now increases Fitness and Strength lessons gain by 1.4
You can't have the princess study a skill if that skill is over 40 and more than 2* it's pair. No more having 100 wisdom and 5 knowledge

Story changes:
Added new summer random event here the Princess visits the player character.
Added new summer random event where the princess has her fortune told, leading to minor reputation bonuses based on what signs she draws
Changed the post-Festival of Flames love scene if Princess is a futa to be more penisy
Made the reject Cecily sequence less insane (It made sense in an older version I swear)
In the very story critical cow herd random even decision, changed the test from a red check to a blue one and reversed the effects.

Interface Changes:
You can save and load the game with a few concessions. The decisions the Princess makes (card color checks) are saved permanently for each run.
To reset the Princess's decisions, you must restart the game. This will also delete your saves to prevent the old save data conflicting with the new randomized run
Moved the Princess relationship stats to the Subconscious menu from the People menu
Added chibi Princess to Subconscious menu
Calendar available one week earlier
The calendar now tells you what the target skill number is for council member encounters
Made it harder to click through color checks without seeing what cards the princess drew
Skills that have their lessons boosted by choosing a particular color conversation option now have a visual indicator that the boost is active on the lesson select menu
Changed the fail check sound effect to be less negative sounding
Changed the phrasing of color tests. It's no longer Test: X Passed/Failed, but something more gentle. This should make the intention of those checks clearer.

Bug fixes:
Fixed white box over text in android version
Fixed a bug where multiple affliction cards being healed at the same time could cause the wrong cards to be removed from the subconscious
Fixed the week indicator on the calendar disappearing if you changed pages.
Fixed a crash in the noblewoman route after gaining the submission card

This is a surprisingly well-polished game. I say surprisingly because although there are many good games on this site, this one plays and looks like something a gaming studio would make.The graphics are superb, the gameplay is fun, the dialogue is good, the only downside is that it is unfinished.

Reminds me a lot of Long Live The Queen on first appearances. I found what is available so far to be of a demo length but sufficient to get a good understanding of what is on offer... and I quite enjoyed it.

Transformations in the game are admittedly thin as stated by the game maker, but this is not important right now as they are there and can be reached fairly easily. Playing through the game is very much an RNG affair (which is why it reminded me of Long Live The Queen), with it being difficult to get a "perfect run" but also quite easy to end up on a "failing game" through continually hitting stress points and your avatar being ignored by the princess if you are too crass with your recommendations.

It is important if you play this game that you think tactically since the game auto-saves and the only way to correct a mistake is to begin the game from the very start. While there is a saving mechanic now, it is not something you can save scum with and does track your decisions.

But this is not a detriment. After restarting the game a few times I had it figured out regarding the skill angles and the game is mostly forgiving up until Week 5 when really stupid decisions you've made start causing you problems. And while there are still bugs in the game of course with such an early Alpha release (had them occur twice towards the end with the Ren'Py engine), but they're skippable and the game is able to continue being played.

Right now it is very early days, but I do recommend this game and look forward to future releases. It is in fact a game I would pay for if it was completed based on this early demo.

Just an excellent, incredibly professionally well done game. The graphics are top notch and fit the feel and theme but the gameplay is smooth, intuitive, and enjoyable.

I give this game a big thumbs up. It's not like most game, but still shows some polish. Player exercises minimal control on outcomes, but to me that will only enhance replayability. Grammar errors still which is not unusual for any work with writing. I had a game ending crash the one time I played it, and it was probably over an hour in to the game.

Definitely a nice addition to this site!

This game is great. It's an ambitious attempt to pull off a whole new style of game: A synthesis of the "princess trainer" and rouguelike genres.

What that means it that it goes week-by-week, with you deciding what skills or traits the princess should develop that week, and how you want to influence her mental state, and then she faces challenges that she can succeed or fail at based upon how you've built her up. The game remembers every choice you make, and you can't go back.

That might be frustrating if the game punished you for failing its tasks, but instead it moves the story forward in interesting ways whatever the outcome of those challenges, sometimes opening up paths that you didn't anticipate. Succeeding generally helps increase the princess's power and social standing, and failing generally has the opposite effect, though that's not always the case. There are at least a couple characters with whom passing attitude checks with them seems to lead to them better manipulating the princess. All of the paths seem lead to their own unique sexy content.

Playing the game requires you to approach it with the right attitude. You need to appreciate it on it's own terms, as a story that you can influence but not directly control. You can't be too attached to achieving certain outcomes or reaching unlocking certain content. You can try to do certain things in the game, and perhaps fail. Being open to experiencing the consequences of that failure and letting the game sometimes tell you what happened can make the experience of playing it satisfying in a way that it wouldn't be if you had more control.

The art, which I believe was created by ApolloSeven, is compelling. It's in an animated pixel-art style. It's high quality, detailed, and attractive. The facial expressions are excellent, and add a lot of flavor and nuance to the interactions between characters. And wow, the animation of the princess's breast being groped is really good. I don't know if that's from a real video that ApolloSeven drew over frame by frame or what, but it seems to be a perfect depiction of how a firm breast would deform, bounce, and spring back when massaged. Not something you'd expect in pixel art animation. Very sexy.

The music is also catchy, and it fits well with the retro pixel-graphics visual theme.

There's a lot to this game. ApolloSeven has clearly put a tremendous amount of work into it, and it really shows. Even though this is (at the time of this writing) an initial release, there's more than enough to jump in now and have an experience that you appreciate and enjoy. The game is professional-quality, and the developer is trying to create something new, interesting, and innovative.

Just to get get a sense of the art and interface, here's an example image from the game: 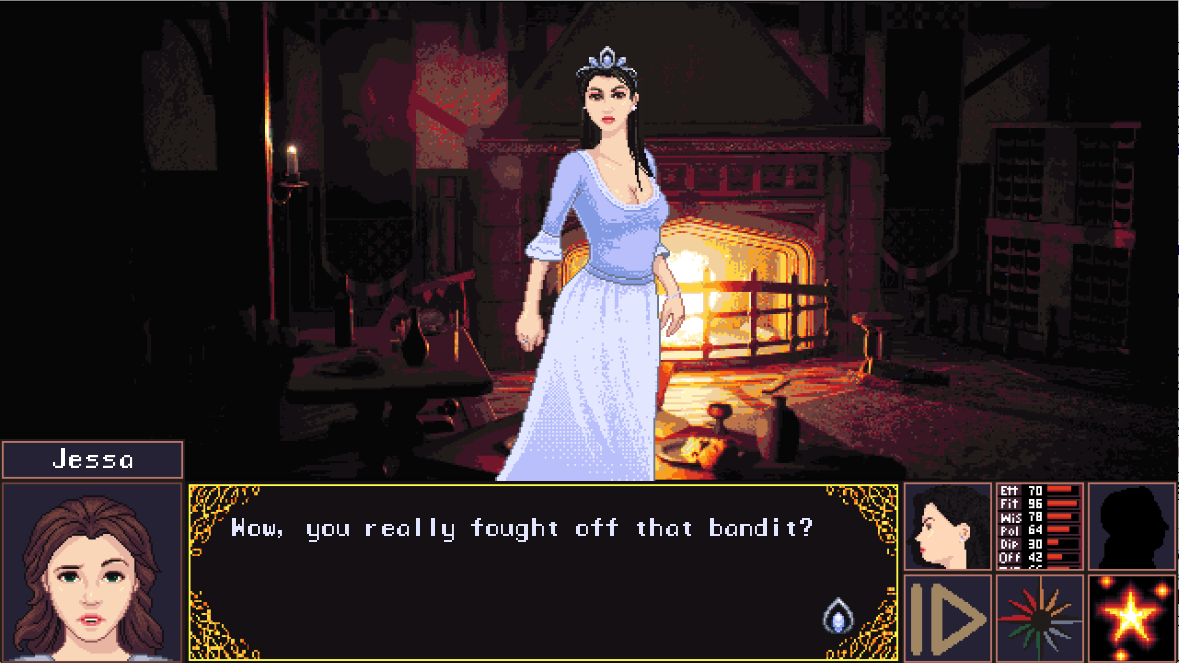