Inner Self Development Program
by Carnile 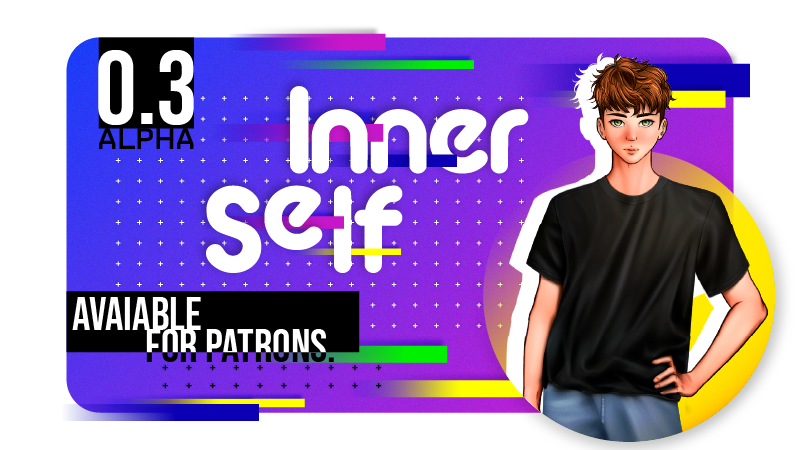 Inner Self aims to be a semi-open world sim-like game, where you are a freshman at university, having to share an apartment with your friend who will also start studying at the same campus, in which you are surprised with a new interpersonal development program.

This is a pre-alpha version, in the current situation the game is playable but with little content.

If you are having trouble not knowing what to do in the conditioning minigame, sorry for not putting a hint or guide, to complete the task you need to pop the resistance bubbles with the left mouse button, you must click on them until the resistance reaches zero.

- Alpha version 0.3a, the game has been updated to fix some bugs that were found.

Currently the game has:

185 drawings and adaptations of the drawings.

System Update:
- Several changes in the game systems to make it more smooth, especially the interface animations. In this version, the save system and the clothing presets are available.

Conditioning Maintenance:
- For accessibility reasons the conditioning minigame was made easier, bubble resistance has a max of 03 clicks and the exitation bar increment was decreased with each beat.

Some system updates:
- The game is now in windowed mode.
- Menu option is available to change the resolution.
- Missing translation of the character view interface.
- Halved the time to advance the dialogue.
- Player can now advance dialog with the space key.
- MAC version available for download.

Incredible UI, great visuals and art style, nice gameplay ideas with pleasant sound effects and animations, quite short and somewhat linear and repetitive at the moment.

I like the ideas behind the "inner self development program" even though it's a pretty common dynamic. I like the art style, it's very polished and fresh looking, kinda anime but not super stereotypical. The physical/actions progression seems a bit stair-like, you shave, then a big jump with everything else, (and so far that's it). The "psychological" progression is a bit more subtle. I think it's fair.

The UI as i said looks amazing, and it's relatively good in terms of use. It's not perfect, because the phone for examples glitches a bit, nothing game breaking, just small cropping errors, and some awkwardness when selecting icons. A change I would make would be the time something takes to show a "help bubble". if you hover over stuff for a couple seconds it tells you what it is but i'd map that to the right click, or i'd make it quicker on hover

So the short of it is this: ui good, design good, small bugs here and there, general lack of content, great polish for the content that does exist, sussy mc and his roommate

The stylistic rendering and handdrawn renders make this game artistically distinct. It's an interesting concept, using unity engine to make a renpy looking game. It feels like renpy in all of it - spacebar dialogue skips, multi-choice dialogue options, and a more conversational style of play. While not the only game to have handdrawn characters and sprites, it is definitely one of the better looking ones.

The UI does have its bugs, and a general lack of polish to game states can be seen by saves bugging out. This is more of an issue in the newer 0.3 version on patreon, but it's likely due to it being an alpha preview. UI lacks certain accessibility features like DPI scaling, ability to enlarge large interfaces such as the mobile screen at the bottom right, which makes text pitiably unreadable without a fancy shmancy monocle.

The gameplay is more of a concept at the moment. You have your routine setup which is enabled by energy which is recharged during sleep. The current options are university and mall(only v0.3+). A lot of core routine functions haven't been implemented. While it seems easy to add new content, due to the author relying on custom renders, this significantly increases the scope of development and the time it takes. However, the releases so far indicate a narrow focus on content and quality, as opposed to unrestrained breadth of development that often overtakes the art. So, while the gameplay is there in its barebones, it is quite polished, and the writing isn't bad, nor the story continuity incoherent.

So, I guess the overall conclusion is that this one will be a slow burn. Due to the amount of effort it takes to polish each segment of the game, we'll be spoonfed little tidbits of content. This game is basically perverted education in university and with better visual flair. I still hate the looks of mc and his roommate, but the content, even in its limited form, is pretty good.

All the annoyances from the inital version have been fixed and things are a lot more stream lined now.

The content in the new release is really good. This is shaping up to be a "next gen" trainer.

Could be a nice game, but this bubble-stuff is killing me. I click like hell, but some of them don't even react aaand... "You fail" and do it again (and again, and again)...

I kind of hate this for various reasons but I'm sure I'm in the minority. Let me go through my thoughts and see if I can get out all the things that made me annoyed as I played. First of all this is a game where you play as Alex. Alex is not the player's character. It is immediately apparent that this will be a somewhat linear story where the character will only proceed down one path with the filling out of the questionaire. It's not for the player to fill out - the player character will answer it all with few exceptions where you can choose between two choices - the questionaire's questions are all multiple choice with four choices but the player can only choose between two sometimes. The player character will fill it out without player input. Yeah, I kind of hate that. It's like a JRPG where choices are meaningless and the player is just along for the ride.

My next issue is with the university itself. What kind of school is this? Who would choose to go here? What do they teach? It seems like they don't teach anything useful. It's like some kind of weird fetish school that teaches alphas and sissies but not things for careers. Every interaction with the staff (two characters done through text and email) is done with some sort of new age flowery cult speech. Every answer is about making the students into what they should be or whatever but that's vague as hell for a place that's supposed to be real. In the meta knowledge genre savvy sense, we all know what it means, but the character never really seems to question anything. What are they even learning in class? What are his goals for graduating from here?

The art is also not to my taste. It's nice but it reminds me a lot of a yaoi comic without the giant hands and the pastel colors. It could be better but know that this will be a linear voluntary game where the receptive player character gets introduced to the sissy lifestyle. I don't know. I probably won't try this again but it's obviously not a low effort project.