The Exile of Aphrodisia
by Judoo (4 more by this author)

Patreon backers can find the Debug version of the game from the Blue Fariy Media Patreon.

I will work on creating a working Linux release later, and with any luck, a Mac version as well.

This game is a downloaded Windows executable for 64 and 32 bit operating systems (Windows 7 and newer).

Exile of Aphrodisia is an adult transformation-themed game inspired by the Oregon Trail and the Odyssey.  Your task is to lead a party of humans across the fantasy continent of Aphrodisia, pursued by demons who seek to enslave the remnants of humanity.

The game is largely revolved around the concept of transformation of many sorts, including TG (transgender), anthro, animal, bizarre body modifications, inanimate, and more.  As a new species to the continent, humans are prime targets for transformations from forces of nature and other sentient races, as well as the gods and goddesses who watch over the lands, imposing their will and (often unjust) sense of justice.  As an elf hired to guide the party, it is your job to keep as many of the humans safe as you can to guide them to the dimensional rift in Niu Heym, the City of the Gate where humanity first arrived a thousand years ago.  You must keep your party healthy and happy, and keep their lust under control to stop them from surrendering their freedom to the demons. 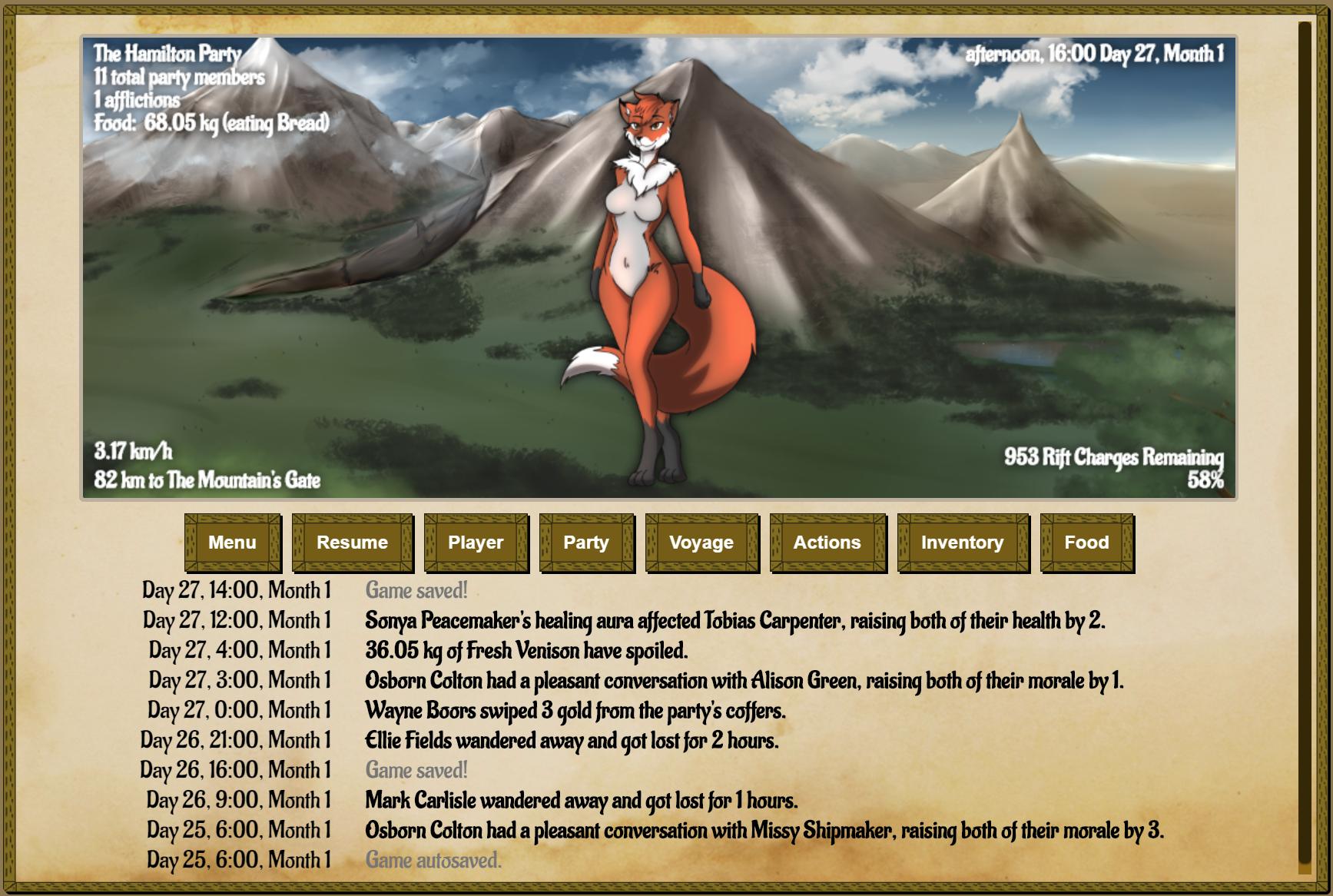 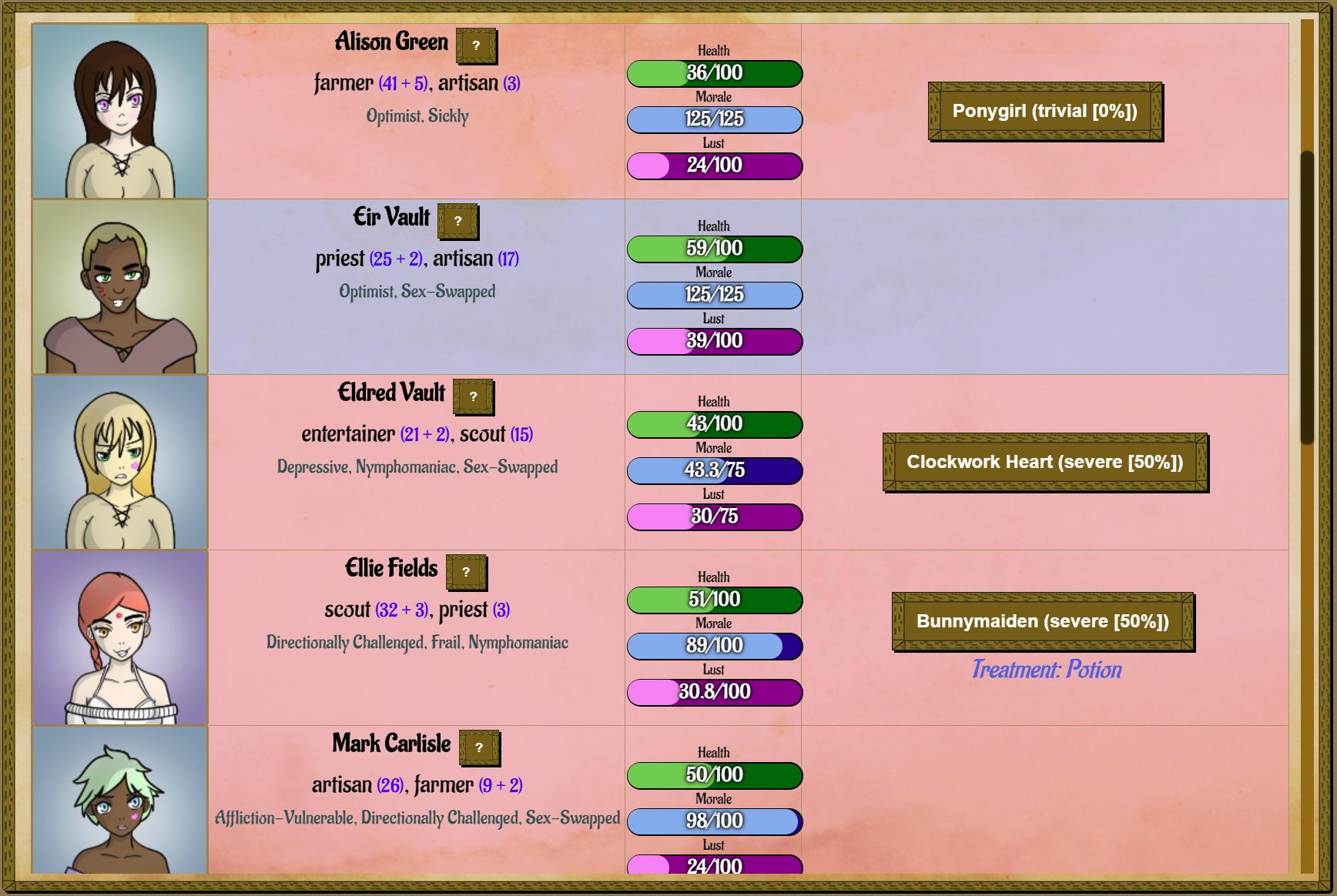 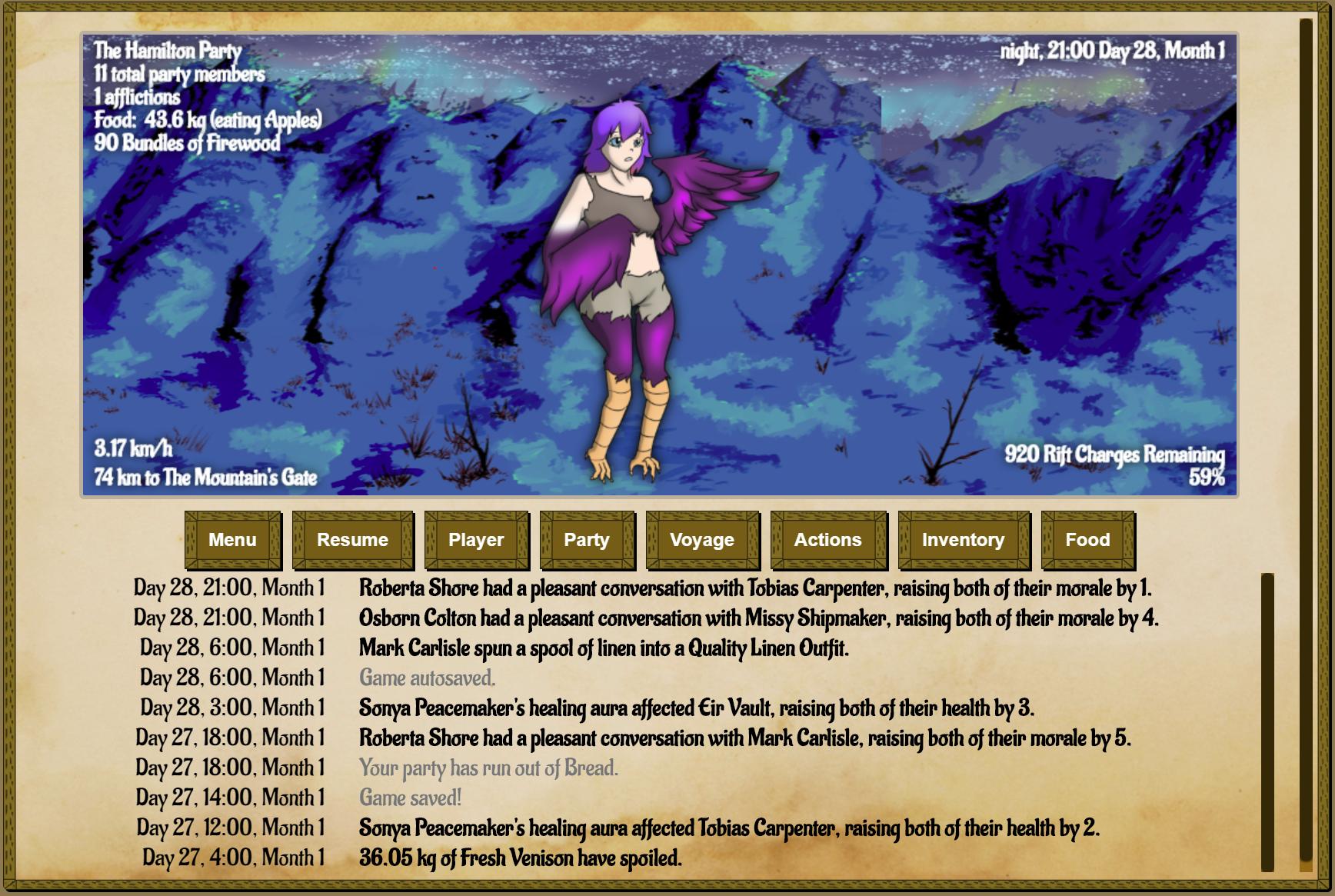 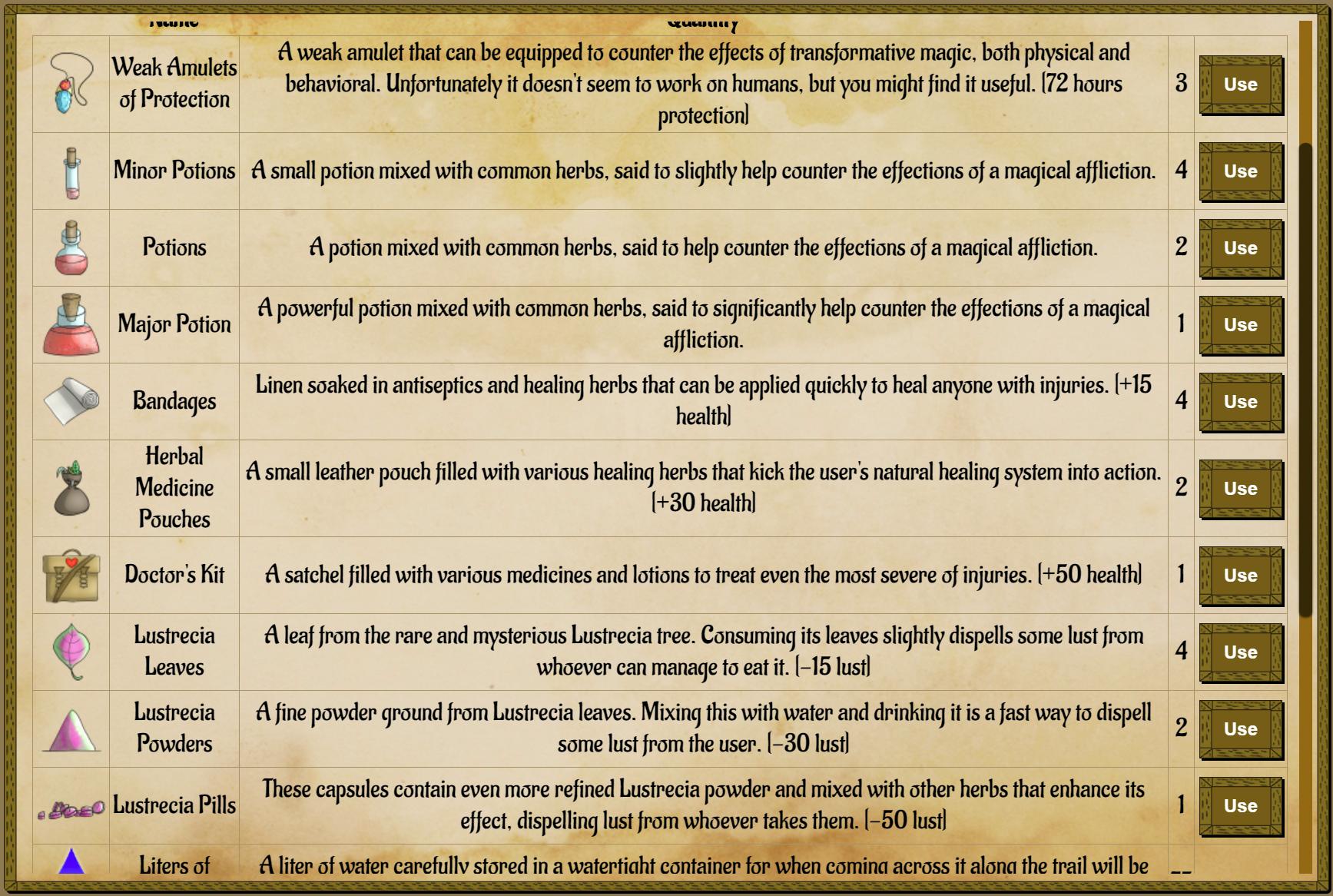 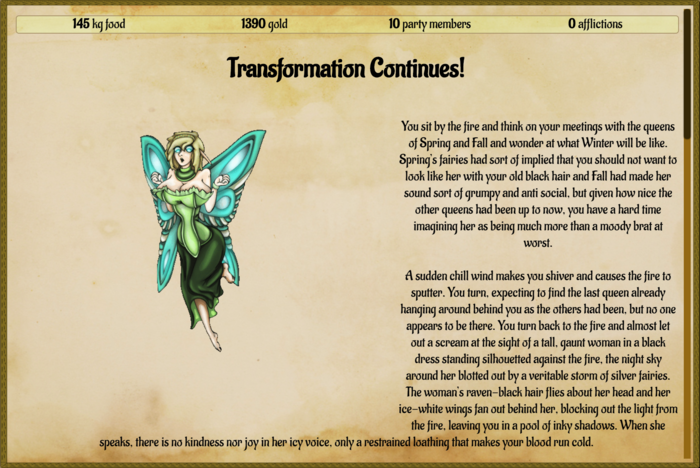 New encounters:
- Size Isn't Everything (tf into fairy with Napoleonic Complex) by Roxanne
- Night of the Cow Brides (tf into minotaur milk cows) by Duhad
- A Tiger's Fearful Symmetry (tf into tiger and tiger into human) by Duhad
- Demonic Music to Electrify the Soul (tf into metal imp bard) by Duhad
- Pinkie Please (tf into pink latex drone)
- Your Wish is My Command (player transformation from female elf to wish-granting Djinn) by Roxanne

New game features:
- The living lovedoll in the new Cock Blocked and Pent Up encounter introduces a new, reuseable lust-removing item that can be used once every 48 hours.

New player epilogues for old player forms:
- 1 win and both no humans / no rift charge loss epilogues for foxwoman in Fun and Games
- 1 win for from Put Hair on Your Chest

For what the game is worth, it is quite enjoyable. There are plenty of encounters and transformations and anything transformation themes you don't like, you have the option to remove them from the play through.

Admittedly, I'd argue its a semi real time action game due to the fact that random encounters can either impede or benefit a playthrough (usually impede but beneficial encounters aren't uncommon) and then you have to manage the party afterwards if necessary by either giving health or lust items to compensate.

Currently, one playthrough of the game can take between 30 minutes to an hour from my experience. But due to the fact that each time you play, you can choose to have a different seed means that not each playthrough is the same.

The few issues I have with the game mostly focus around the morale and potion mechanics. The only way to boost morale is either through random encounters (which more often then not actually cause you to lose morale) or boost it through the taverns in villages which don't always appear. Health and lust can be mitigated through the use of items which allow them to be more fair while the morale meter is mostly down to luck.

The issue with potions is that they don't always work. When a party member is struck with an ailment, it can either just instantly be cured without the use of a potion or it may never be cured even when using a major potion. Sometimes there may be an ailment I want to see affect a party member but they somehow just get cured without resting or the use of a potion while other times, I may want to cure someone and they end up either taking forever or never being cured.

Besides the issues I have, I mostly would rate this game positively and whatever your into regarding transformations (bimbos, mtf and ftm, corruption, animal etc.) There is something for everyone.

Loads of fun, wide variety of tfs, including some rare ones.

My only disappointment was that the party members can only be male or female, no in-between, the tfs always result in one or the other. At least the player character gets to blur the gender lines a bit.

The Morale stat and Afflictions need some work, I think. It's rather boring when everybody abandons the party in the first leg or two because you have no active way of boosting morale and get hit with a couple morale draining encounters. And it seems like potions are mostly superfluous, with most of my party members shaking off afflictions without any treatment more often than not, or succumbing despite application of Major Potions in the initial stages.

Remember how in Oregon Trail you needed to carry food or your people would die? Now imagine if that food rotted so you HAD to buy food at every opportunity.

Remember how in Oregon Trail the game would funnel you through key locations so you could plan and anticipate those goals? Now imagine if those locations had randomly generated shops/resources.

Remember how in Oregon Trail you could blitz through the game by whipping your oxen to death because you just wanted to see the ending? Well I hope you're ready to cough up some cash cause there is literally no way to go faster.

One thing you should know to get the most out of this game: you need to have the patience to read a lot. I had tried getting into this some time ago but was scared away by the large amount of exposition and setups for encounters. However, I gave it another go recently and have been pleasantly surprised. The writing quality is very commendable with a good variety of encounters, though with repeated play you do start seeing repeats. The gameplay is actually quite challenging, I've probably had about 10 playthroughs so far and I've only actually made it to the end twice. That said, you are still rewarded with the same summary as a win, and there are various 'bad ends' to look out for anyway, so this isn't an issue. The artwork is high quality and fairly consistent through the game, and I'm hoping to see more thorough coverage of the total TFs in the future. I'm also very grateful for the setting that blocks player transformations you've already seen before, because those are some of the rewarding surprises with each playthrough and it's good that you can fast track your way through them.

Easily one of the better games on a site filled with unfinished garbage, low effort patreon scams and so on. Can safely say that this is neither of those and isn't even among the abundance of abandoned games either as this obe seems to be getting regular updates and everything. A pleasant, somewhat nostalgic feeling lewd game that's easy to play and enjoy for a good few dozen hours even with all the content that's in it at the time of this "review"