Accidental Woman is an interactive fiction life sim game for adults. It's built using a customized version of the SugarCube 2 format for Twine, and can be played on most OSes. As a life simulation game, it's quite different from the more common choose your own adventure (CYOA) format found in many text-based games. The early development of this game has been focusing on building a detailed game framework to allow for an interactive open-world sim experience. The most similar game here on TFGS is Girl Life, though Accidental Woman takes a more story-oriented approach with a faster pace and much greater focus on dynamic content.

This is a large project with ambitious goals. Good design, technical savvy, and considerable experience are being used to meet these goals. As a professional of many years in my life outside the world of the internet, I've been involved in many large and complex projects. The last major project I had significant involvement in was valued at over $80 million. In my private life, I've published mods or been part of teams creating mods for games in the Elder Scrolls and Fallout series, going back nearly two decades. I understand that this is a complex project that will take considerable time. This isn't the unfortunate but all-too-common case of a developer trying to do something--or making promises--without understanding the work that is required.

My motivation for this project is to make a good game, one that addresses many of the shortcomings I've personally found in other adult games. I strongly believe that many of the developments and advances in design and methodology shouldn't be excluded from games simply because they're of an erotic nature. I'd like to inspire potential developers by showing that there are plenty of CS/SE techniques out there that can help them make a better game, by using them to make a better game myself. In time, I'd like to offer a framework and code to the community to build upon and expand to create new accidental worlds.

Accidental Woman is currently in an alpha state!

This game is following a software development process found in the real-world, focused more on long-term success rather than short-term appeasement. This is sadly unusual for adult games, but necessary for the success of a complex project. Without naming names, there are too many amazing projects out there that have slowed to a crawl or failed altogether, largely due to ever-increasing technical debt from a focus on short-term content.

There's plenty to see in the game, of course, but be aware of the limitations of what you're playing. A lot of the content may not be obvious at first, you'll need to explore rather than sit and wait for things to happen. Feedback is always appreciated, but please be aware that the public version is noticeably behind the most recent release due to the pace of development; things are constantly getting better!


A LOT of information on the Accidental Woman project is available on the game's website, wiki, and development blog! If you have a question, there's a really good chance that it has already been addressed. (But we'd still love to hear from you on Discord!)

Your support is always appreciated on Patreon, or SubscribeStar though completely-free versions of the game will always be released without content limits, after a delay. 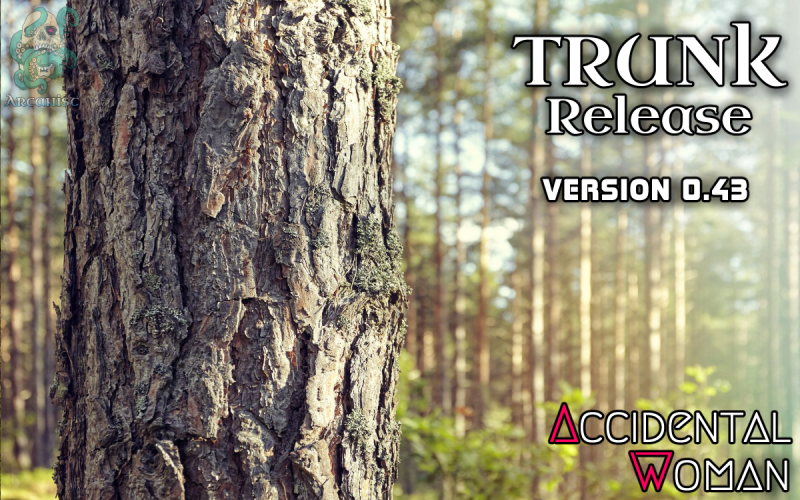 A relatively new town nestled in a small valley and surrounded by old-wood forests, Applewood is a planned community that was build to give employees of the Institute a place to live. Clean and beautiful, Appletree is a paradoxical town that manages to be both idyllic and active at the same time. No matter where you look at the town\'s calmly refined exterior, there\'s always something strange, exciting, or both hidden just under the surface. It\'s probably thanks to the unique people who live there; the scientists, engineers, and other employees who work for the institute.

The game takes a blended approach to NPCs, with only a few 'fixed' NPCs that stay the same from play-through to play-through. Many of the supporting characters use a blend of fixed and random attributes and stories. The majority of Appletree\'s people are made up of random generated NPC characters. Unlike most life sim games, however, generated NPCs use a story thread system. The story threads are composed of several elements that are randomly combined into unique stories. These inform the character's behavior and personality, and provide depth to NPCs that are typically only differentiated by appearance and a few personality archetypes in other games.

The idea is to create a life sim game that allows a lot of variety and control over the player character in a richly-detailed world, while providing plenty of opportunities for players to experiment, explore, and challenge themselves with different player characters.

In the middle of all this, players will struggle with employment and managing their character's life from fashion and home decor to friendship and mental health. Players can guide their character to outstanding success, or watch them devolve into a sex addict with a drug problem. Along the way, they'll deal with the unique circumstances surrounding Appletree, the Institute, and their own Transformation.