Queen of the Seas
by Malhavok

Slutting it up on the High Seas!

Queen of the Seas is an RPG  with heavy non-consentual themes. You play the role of a young man who elopes with his lover in the middle of the night. Unfortunately, you booked passage on a ship full of pirates and they quickly enslave both of you. After selling off your girlfriend, they decide to keep you on board as their slave "Cabin Girl". Can you survive and win your freedom before your mind breaks?

This game features the following elements:

CHANGE YOUR HOMELY "CABIN GIRL" FROM THIS: 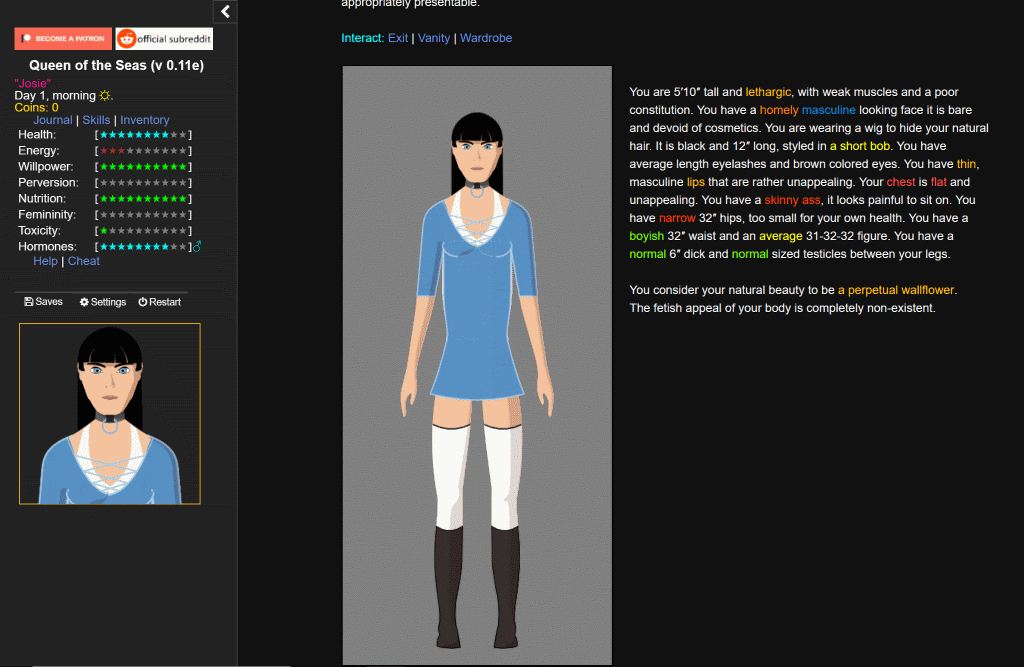 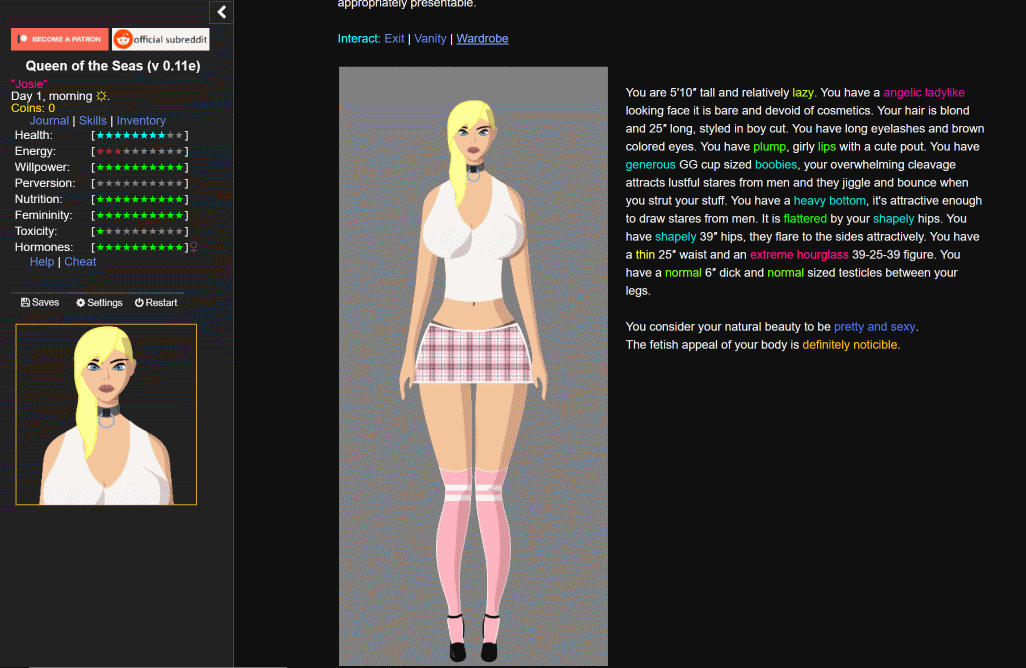 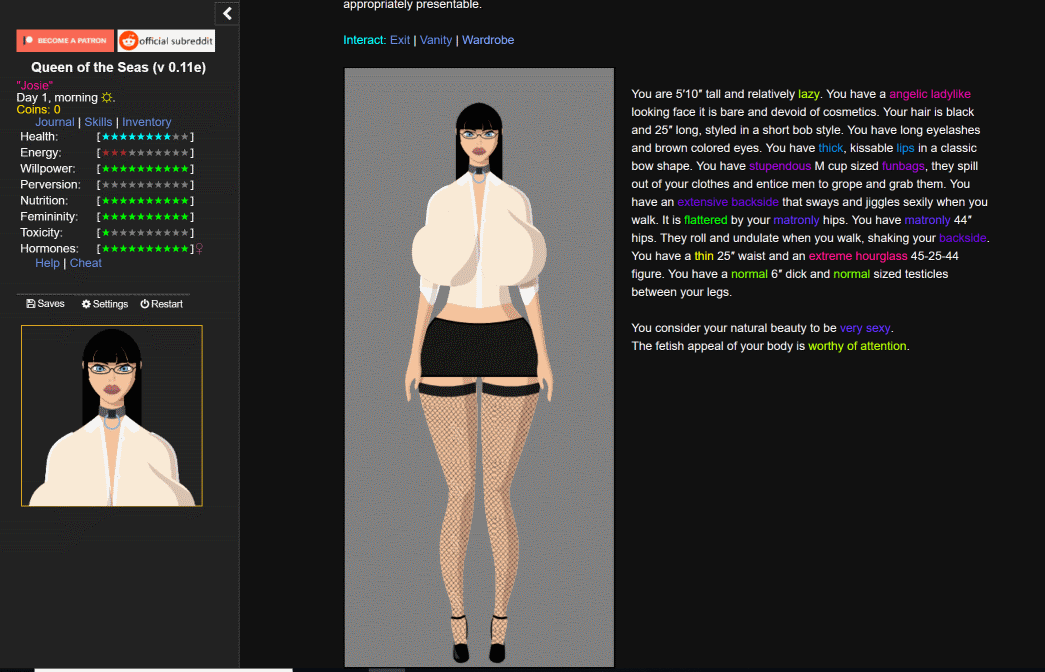 AND BEYOND! (Yes, it gets even crazier. IDKW but it do)

ALONG THE WAY YOU WILL MEET DIFFERENT CHARACTERS THAT WILL SOMETIMES HAVE MUNDANE OR SLIGHTLY UNSAVORY JOBS FOR YOU TO PERFORM! 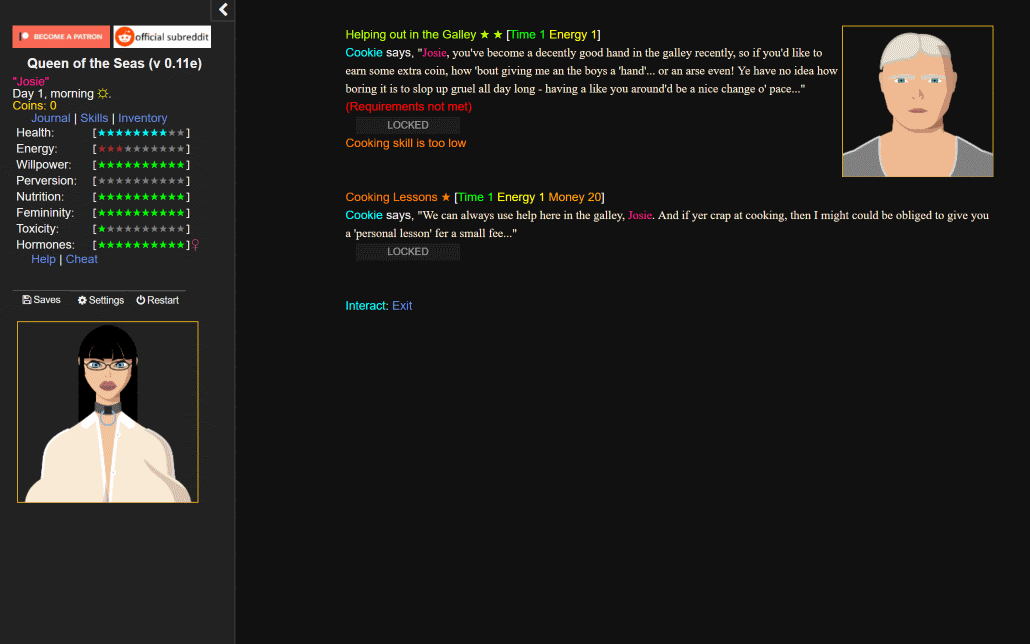 AND OF COURSE, QUESTS TO COMPLETE FOR VARIOUS REWARDS! 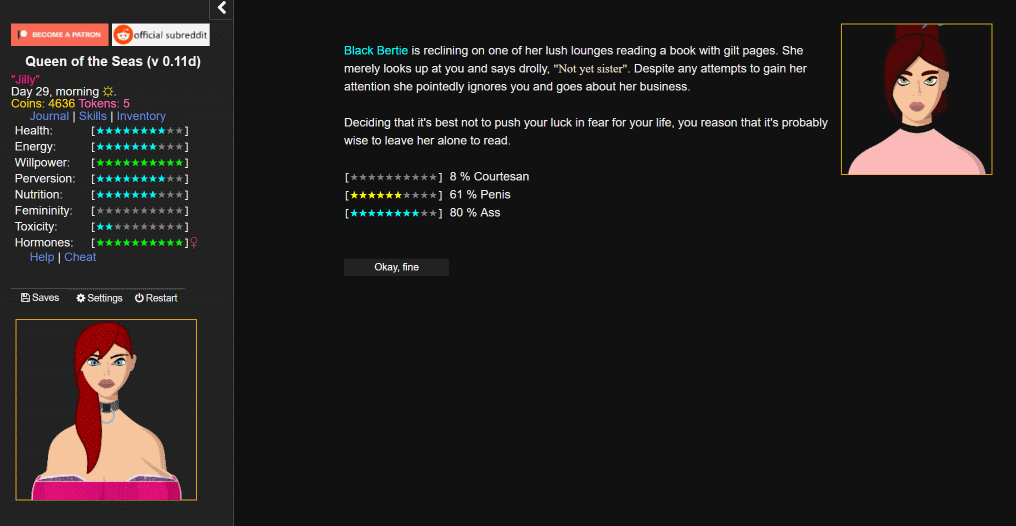 YOU WILL ALSO PLAY MANY SEX BASED MINI GAMES 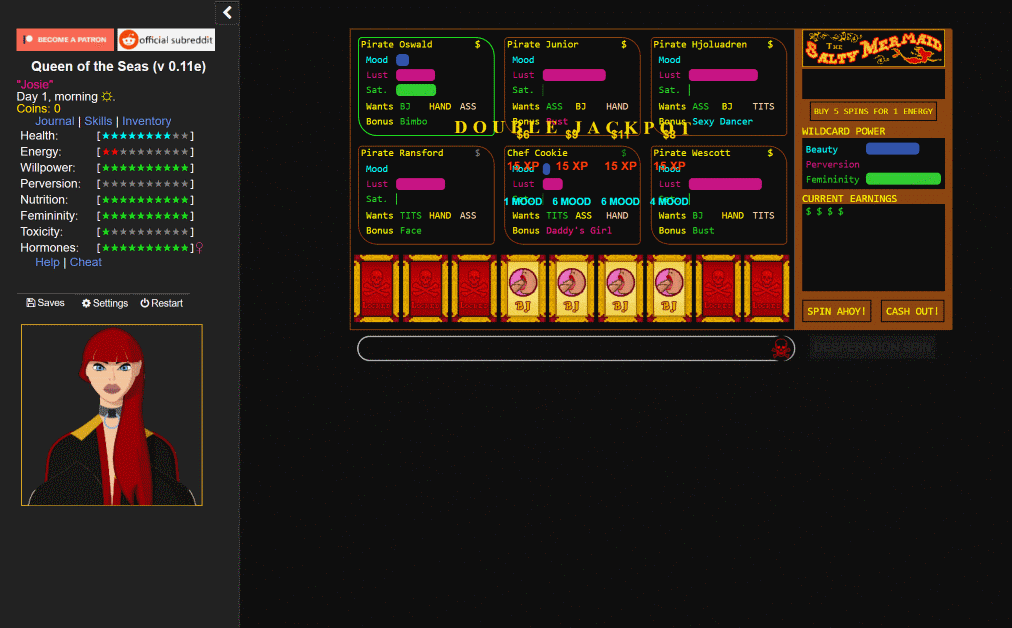 SOME LESS GRAPHICAL THAN OTHERS 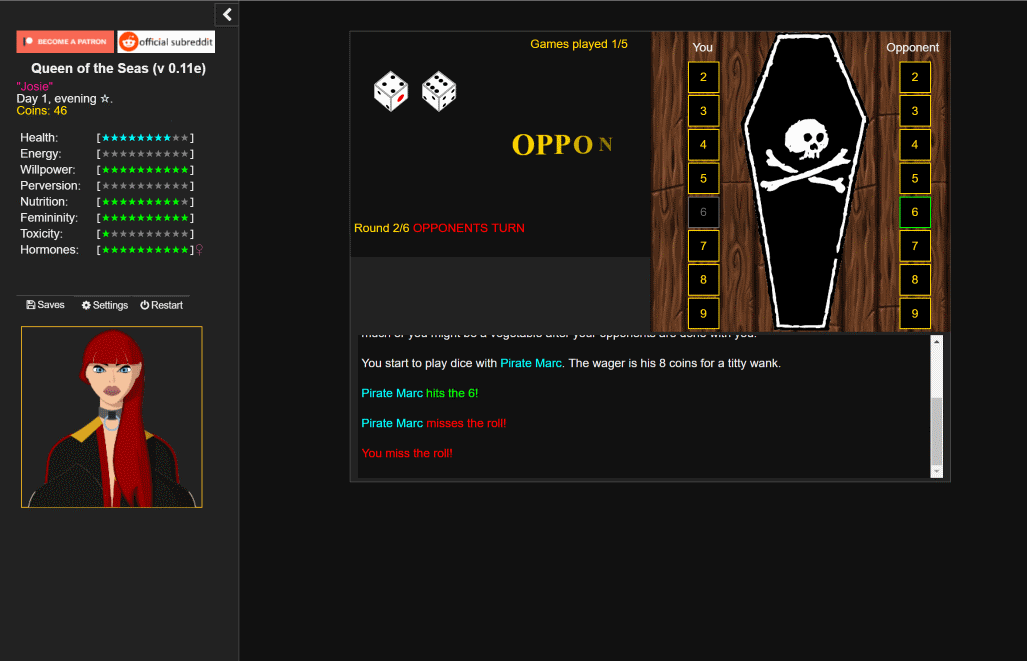 SOME WAY LESS GRAPHICAL THAN OTHERS 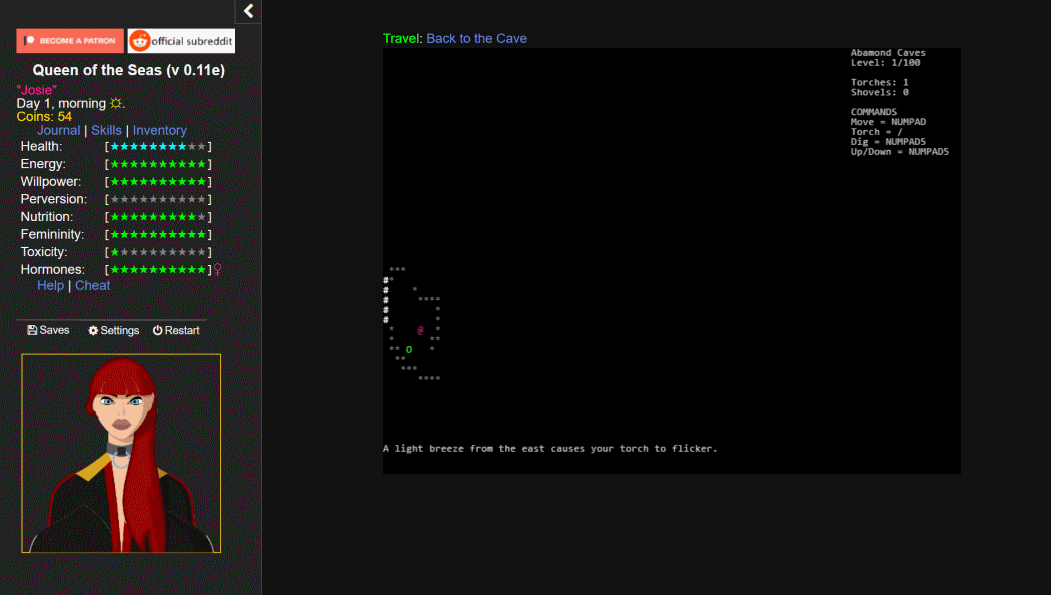 AND OF COURSE, ENGAGE IN DANGEROUS HAND TO HAND COMBAT USING A VARIETY OF SPECIAL SKILLS!

(Watch out for those tentacles, we all know what happens next!) 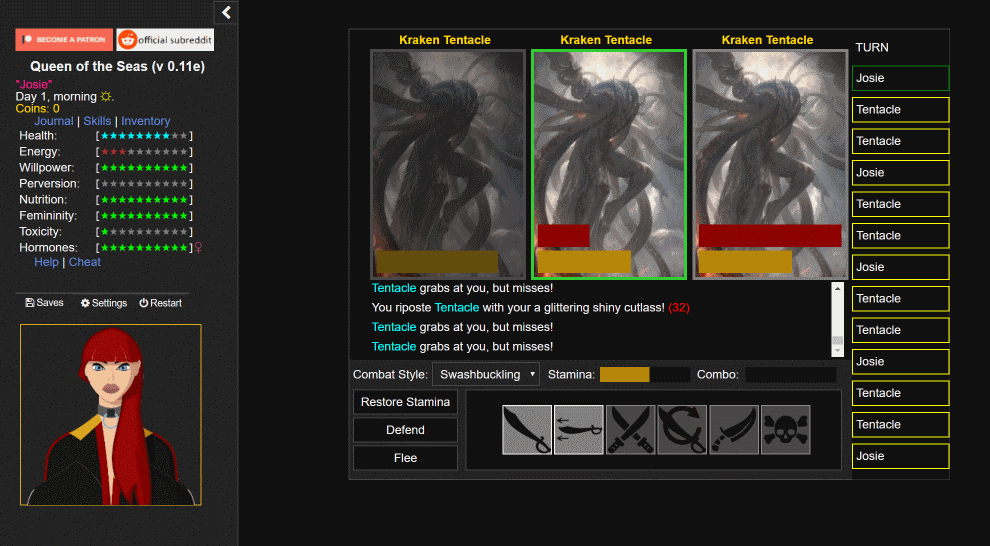 The exclusive Patreon 'Fan' version comes with a comprehensive cheat menu that not only allows you to alter states, but finely detail exactly how your character looks. I'm very grateful to my Patrons, it's because of their support that this single person project has grown so rapidly. If you like this game, please consider supporting it's future development by becoming a Patron! 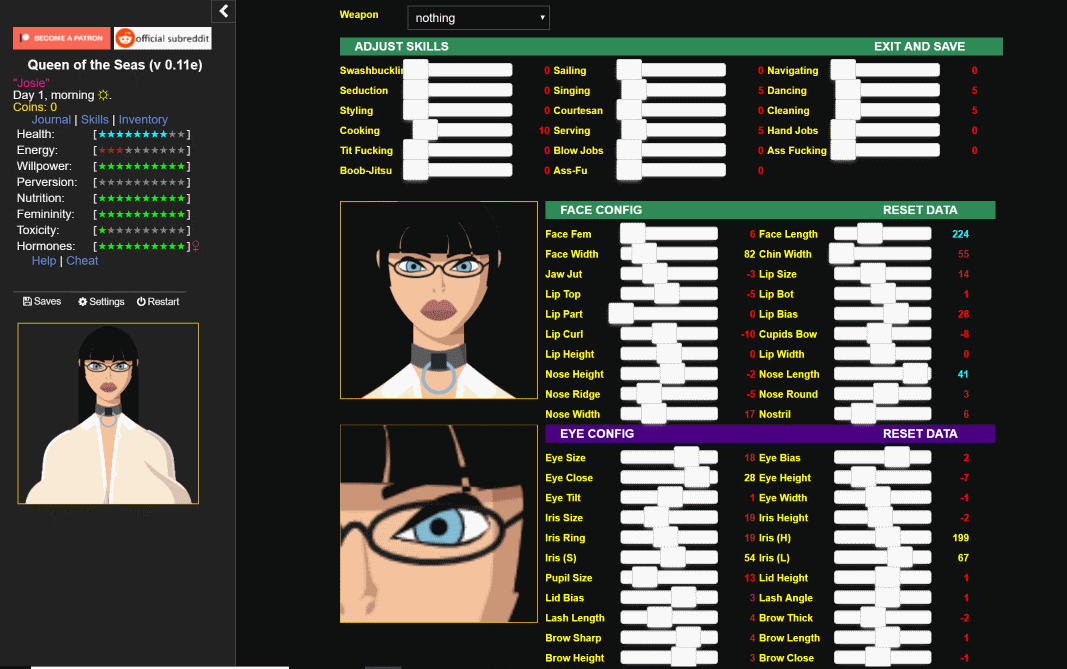 THIS GAME IS IN ALPHA STATE

While there is a wide variety of content and mini-games that are currently playable, the game itself is not yet complete. New stuff is being added every release and bugs are being fixed as fast as they are found. You can keep track of the state of the current release by visiting the games project board and you can download and build the game yourself from the github repository. If you run into an issue or a bug, please report it in either the discussion board or as a new issue in the issue tracker.

I also accept contributions from the community. So feel free to make your own pull requests to this project, or just drop me a line in the forums to discuss. A lot of people have contributed so far to this game and it's very much appreciated.

Generally speaking very old versions of the game are not compatibile with new versions. However, starting at version 0.8 you can load a save file from a previous version and mostly expect it to work. To do so, please load your old version of the game (for example 0.7b) and save it to file. Then load your new version of the game (for example, 0.8) and load the file. This is not 100% guarenteed to work and you may lose a little progress, but it's better than nothing.

You are a young man who is in love with the daughter of the Governor of a small Caribbean-like island in a fantasy world. Since her father won't allow you to marry, you decide to elope by booking passage to the mainland on a passing trading ship.

Unfortunately you didn't do your research and end up hiring a bunch of pirates. It seems that these pirates are a superstitious lot, so they believe that having a woman on board is bad luck and as such they quickly sell your lover off as a slave to a brothel and recruit you into their ranks as their newest crew member. It's a pity about the job...

As the new "Cabin Girl" of the Salty Mermaid, can you manage to raise the price needed to free yourself from bondage, or will you find some other way to escape? Will you ever see your fiance again?

You - A young man abducted by pirates to serve as their own private prostitute.

Your fiance - Missing since she was sold. Can you find her?

Captain Reginald - The sadistic leader of the Pirates. He holds your fate in his hands, literally.

Kipler, the First Mate - A very large black pirate with a peculiar fetish. He\'s good with his sword and his cutlass as well.

Cookie - Responsible for many crimes against humanity. The ship's cook.

Julius - The quartermaster on board the Salty Mermaid. He also dabbles in alchemy and is always looking for test subjects...

Lord Rowe - The Governor of your home port, Isla Harbor, and the father of your missing fiance.

Winning the game - Complete the Captains quest. There may be other ways.

Hormones - You have them. Certain things (food, potions) can alter them. The more male hormones you have the more masculine your character gets, the more female, the more feminine. This can (and will) revert transformations brought about directly by using potions or drugs or food. Generally if your hormone balance is strongly favoring one sex over the other, expect to slowly drift towards that state. Reminder: Your testicles produce natural male hormones - if they atrophy too much then they won't be able to produce enough to revert you back unless you clear your system of all ingested female hormones.

Potions and Drugs - They can have strange effects on you and generally cause you to gain "Toxicity". Toxicity will poison you over time, but also decreases over time. There are also some food and potions that can instantly remove some Toxicity if you find them.

Food - Not all food is created equal. Some strange food has certain magical, body enhancing effects on you. They and some potions are the only way to achieve some extreme alterations to your body.

Skills - Are important. They determine how well you perform certain actions, including ones that can earn you money.