You start as a young, effiminate, male just entering college. You encounter an older, more experienced upper-classmen who's taken an interest in you.

The game will progress as I go along including both content, and ui updates, as well as custom animations (rudimentary at the moment).

This game is free to play, but if you would like to take part in the polls, you'll need to head to patreon. Early releases will also be available to patreons, these are set to weekly at the moment, but as the project grows bigger and bigger, I'll likely move it to bi-weekly and then monthly.

If you'd like to join my discord, here's the link. Discord


And if you want to try the latest Patron version, go here. PATREON 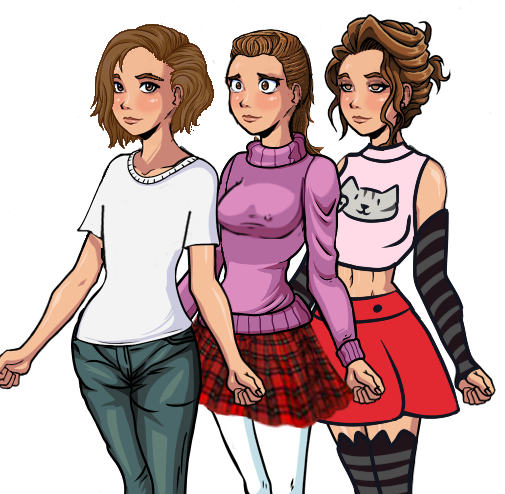 You are an of age freshman at an un-named college who is easily bored and moving forward with no real direction. You meet a few women in your life who promise to spice things up.

Bailey- Your boss at your part time Job.

John- A friend of a friend.

There isn't much of a walkthrough, but I and others are here to help via discord if you encounter any issues.

Common problems: Make sure you run the game from the bugfix if there is one, extract the folder before playing, you have to click a separate button to lock the cage.

.0.6.1 Minor tweaks and whatnot, cleaned some stuff up here and there, added some new scenes with Physical education and Ms. Presley

.0.5.3 More scenes with Riley and Sasha, New outfit, css and bugfixes, and of course, happy holidays.

.0.3.0 I've added more content for bailey as well as fixed a few bugs here and there.

.0.2.8 Riley's questline has been expanded, roughly the same amount I added to Baileys in the .0.2.7 update. Minor bugfix, going to the gym has been made simpler.

.0.2.3 Minor content update, tweaked some behind the scenes stuff, added some buttons to the home menu.

.0.2.1 Mainly a bugfix, though I did add some new menus and insert some animations where applicable

.0.1.7 Minor content update, modified some behind the scenes stuff, technical and bugfixes.

.0.1.4.Minor content update, Avatar system improved but not perfected, not sure how to get the stockings to layer under your other clothes, everything I've tried so far has failed. First physical, albeit temporary transformation.

.0.1.1 Very small content update, improved ui stuff, fixed a bug where you could spam the wardrobe buttons and get infinite cash.

.0.1.0 Content update. Added new task to pass the time, walk around town. At the moment what you can do varies between three things randomly, and the text changes via what you're wearing. I plan on adding randoms based on specific things later on. Changed text from blue to white, and altered the opacity to make the text more legible. Plans to overhaul parts of the UI, but will have to do more research

.0.0.9 Minor content update, wardrobe items now have images that pop out so you can view them before wearing them(eventually plan adding that to the store)*note, a few items don't seem to do this for some reason, but I'll have to look into that at a later date as it isn't game-breaking or anything. Plan to do some more flashy/visual things later on, maybe adding sound to certain scenes.

.0.0.6a Bugfixes/tweaks, more images added as backgrounds for places/actions. Wardrobe updated to include work/top bottom in sidebar.

.0.0.4 Minor content update, modified avatar (less bulky, still not perfect) (fixed bug where you didn't have to have bra in one scene and fixed return from menus causing an infinite loop)

.0.0.3 Minor content update, modified avatar (very bulky, need to redo when I figure out how)

Changed all hotkeys that use "2" to 9, still investigating why it won't work sometimes under 2... (sleep hotkey still out of commission)

First of all, the UI is a horrible mess. I'm not sure how it devolved so badly over time but it's such a convoluted mess. It does look like it had a lot of work put into it. Things are animated, they're responsive, and considering the complexity of the entire thing it's impressive. But it's so BIG and in your face constantly. I'm constantly opening and closing menus so I can see what time it is, what my stats are, what I'm wearing. It never ends. If you don't close down absolutely every menu you can't even see what's going on with the writing and make sure you're not missing anything, and even then for some reason you'll find yourself scrolling down constantly in order to read small passages because pictures are blown up and stretched out.  I legit feel like I need to be playing this on a big screen TV with original resolution in order to see things as they're supposed to be seen.

As for the good things: Everything is very well written and there's quite a bit of content. The characters have their own personalities and it's fun to explore the things that are there. Compared to a lot of games on here it's definitely more fleshed out in content and feels like it progresses unlike a lot of patreon milkers. Even with all my gripes with the UI I would still definitely recommend this game if it's your type of genre. I'm just personally pleading with the dev to remember that sometimes less is more. A fancy book cover doesn't make the content interesting.

Have watched it change over the years but now the UI is a complete and utter mess. I never minded the sidebars so whoever told the dev to change it the way it is now, is a fool. Won't waste my time on it anymore. Which is a shame but what you gonna do if the UI looks like the dev barfed out a heaping amount of CSS and left it alone.

Game used to be a linear sissification game. It has now been turned into an "open-world" type of game. There is a fair amount of grind in order to reach naughty scenes but the progression feels generally pretty good now and satisfactory.

Also it's very obvious the games UI is being optimized for mobile. On PC it still looks pretty awful unless you zoom in a fair amount and change your browsers size to match a general phone type layout where the height is about 2-3x the width. With proper browser and zoom settings the game is better looking than most text heavy SugarCube games with a very nice paperdoll type graphics for your character.

TMoaS was my very first game years ago, and I liked the concept.
But then the story got more and more confusing, with lots of "come back tomorrow". Meanwhile there are way too many NPCs with meanigless dialogs and the UI gets worse with each update. Bummer!

As other reviewers have said, the UI of this game is truly just awful. The sizing doesn't feel right, icons and test tend to overlap with each other ever so slightly depending on how the page loads, the character creation menu changes your name back to the default when you select colors, and so on.

Aside from the UI, I feel that the content in this game is relatively lacking as well. When you start, your immediate instincts would be to check out school, your roommate, and work.

The work route at the diner is incredibly unsubstantial. I feel that for a game about how your player character gradually becomes corrupted, there should be some way of making the chastity cage and plug feel like character decisions. Having a pop up that tells you exactly what to do is just not good game design. Perhaps there should actually be dialogue with your employer that indicates this at all? This sort of follow the line gameplay massively contributes to the fact that this game can tend to  repetitive.

The roommate route being unfinished is quite puzzling to me. Obviously a full game isnt going to just appear from thin air - it needs to be developed, which takes time and money. However, it feels very unceremonious to interact with your roommate only to have a message saying to expect a slow burn, effectively telling you that all of the repetitive actions you just did were not only for nothing, but you'll eventually have to do them again at a later date to see the new content.

Overall, I think that his game has so much potential, and seeing it be implemented in this fashion is a bit upsetting.