Hermaphrodity and the Mystery of the Missing Specimens
by fapforce5

Hermaphrodity and the Mystery of the Missing Specimens is a point and click transformation game about a young man's post high school life. 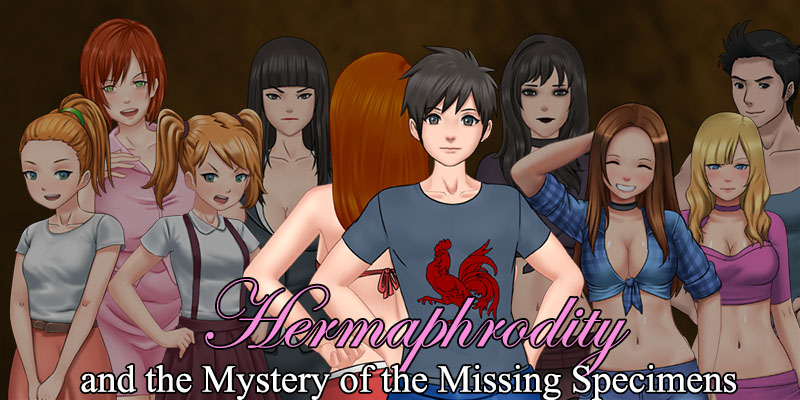 Map! First part is in the game
Updated Settings.
They work now. You can add fantasy creatures (goo in the sewer, werewolf and mimic) in the forest
Fight / sex scenes in the fight event
Update difficulty
Change how the main map view
Black Room: have 6 different events
Fighting: added defense and submissiveness (Needs a bit of work) If you defense is high you take less damage, if you submissive it's easier to submit, harder to dominate. If your submissiveness is low then it's harder to submit and easier to dominate.
Kicked out of house: New event to get back in
Piercings: Added ear and nose rings
Sissy School: Added Hypno Event

The author did a very large amount of great work with visuals and animations.  The visual-heavy nature of the game is a huge positive and must have taken a lot of work.

I understand that some people like to be generic, cause that way the player can imagine whatever they want in the character. But I'm actually the opposite and prefer much more when the author gives clear indicatoin on what the main character thinks.

That's what's really missing for me. I can't understand if the character is a sissy or a corrupted alpha that fucks every girl and has atitude to hit everyone he sees as hot. If he's a corrupted alpa, then I would say the corruption is really easy and quick. If he's a hidden sissy at heard, then he's just too alpha and confident at the beguining, before you can start the training. One day he training how to sit like a girl, all macho and stuff, then the other he is ASKING, voluntarily, to be transformed.

There's no context to explain these quick change in personality.

But if this game is expanded by adding more dialogs that explain the decision making of the character, and if more steps to the trainning are added, to make the corruption less abrupt, then I'm all for it. An easy way out that explain sudden changes in the main character's mind is a strong hypnosis, but that takes away all the fun from the story. It's ok to add hypnosis, but as something that aids the realistic corruption....

Oh I really hope the bimbo content can be avoidable and I don't have to become a mindless bimbo....

About the different paths: I recon it must be hard to make the programing for it, but if you could make the character prefer some paths over the other based on your previous choices, it would be awesome. Like, if you've chosen mainly sissy stuff, or a submissive mindset, I would say it's weird that I can chose a dominant aproach to a situation when I've been choosing submissive answers all along.

Keep up with the great work FapForce!

I love how you can pursue the male path, and when you're done, switch to the fem path. The sissy school is one of the best sissification content mills, it literally packs a whole bunch into one neat interface, I'm actually very impressed

I haven't had any game-breaking bugs, there was a typo or two, I honestly can't fault a project this large for that

I hope we'll get access to the gym locker room guy, and maybe bring him home to help the landlord and the girls learn more about "real men" or something kinky like that

Oh, a small issue, on the largest boobs size, it says undefined, and also when they react to your increased size, they allways quote size, rather than size-1. Author knows what I mean, but for others, if you get A cup boobs and they react by saying that B cup boobs really suit you, it's just a small bug, it doesn't break the game, well unless you go for the biggest boobs, in which case it will say "undefined". Speakin of biggest boobs, the black nighty texture is misaligned on the character portrait, one the left side(or character's right side), a part of the breast on the side is uncovered, probably just need to move it to the left(character right) a little.

Anyway, the game is great, well-written, I have nothing bad to say, just a big thank you for author's excellent work!

Great potential, but still a bit too buggy.

While there aren't a lot of bugs, there are still some that bothered me during the playthrough.

Without going into spoilers, after one of the Truth Or Dare game with co-tenants, different things could happen, but consequences were clearly written for only one of those paths. I have never initiated anything sexual with co-tenants and yet I was accused of it and main character even admitted this even though it never happened :/ Also, there are a lot of bugs related to Tiffany and her house not being accessible. Or maybe It's just not yet implemented?

Another thing I don't like is the text. Author is definitely a developer and not a writer. Text and interactions are rather simplistic and, frankly, quite boring. It would still be ok even, but, combined with immersion-breaking bugs, it becomes too much.

Conclusion : 7/10 : good game and much better than most of the games on this site, but it hasn't reached its potential yet.

Recommendations to the author :

- if you have gathered a loyal group of followers, try asking them if they would like you to focus some releases purely on bug fixing without any new content. I believe that inconsistencies is one of the main problems in this game.

This game has its own unique style and I think it comes together to make something good now. It's colorful and lively rather than realistic. The main character either makes choices that lead to sissy content or essentially nothing happens, so it's half forced sissification. There's a fair amount of content.