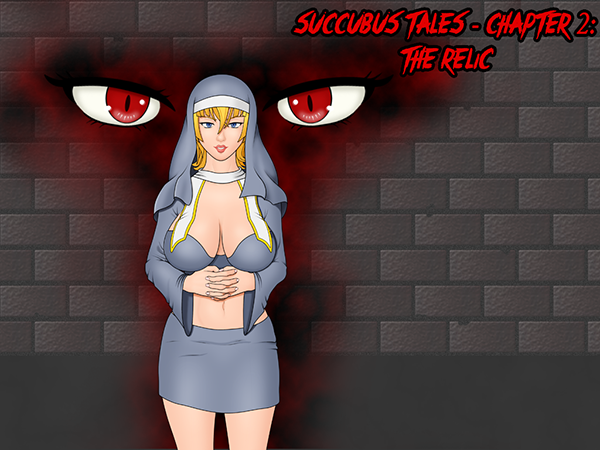 This is the Second Chapter of my Succubus Tales serie.

As in the first chapter, you'll take the role of Nicci, a succubus possessing a nun's body;

this time you need to retrieve a relic beneath the city of Veisen while corrupting it's citizens.

This is an rpg-maker Vx-Ace game where you need to corrupt everyone in the city using different methods and turn them all into demons;

it takes heavily inspiration from Vilage of Nightmare series;

Unlike in the first chapter, I've added a little more "depth" to the game, trying to make it less "linear";

in this second chapter you can, most of the time, choose who you want to corrupt;

I've also added a "suspicion system", where doing evil deeds will increase the suspicion bar, while doing normal, good actions will lower it;

so be sure to balance your actions, because if the bar fills to 100%, it's game over!

Second Chapter of the Succubus Tales serie.
As in the first chapter, you'll take the role of Nicci, a succubus possessing a nun body;
this time you need to retrieve a relic beneath the city of Veisen while corrupting it's citizens.

- New, non-sexual event - fixing the broken bridge in the ruins

- Added a little hint during the tutorial, stating that you can rest to recharge your Dark energy

- Added a "-1 to suspicion level" while sleeping

- As usual, a Big thank you to Hoboy for proofreading the game!

After some complaint I've decided to reduce the grind to advance with someone's corruption:

- Thanks to Hoboy for the usual great work at proofreaing the game!

- Tweaked some old maps' details
- After Risa arrives in Veisen, you can make her work in the clothes shop, lowering the Suspicion.
- After you've fully corrupted Kreiss, ask him about the relic and discover the ruins beneath Veisen!
- enhanced the dialogue system :
a Lot of people asked for it...now you'll see the avatars of the main characters when they talk to Nicci, on the right side of the screen.
- Thanks to Hoboy for the usual great work at proofreaing the game!

- Scripts: I've replaced the quest-log with a better one; this one should be bug-free.

- Interface: I've replaced the original window skin of the game with a custom-made one; if you don't like it, just open the game folder --> Graphics --> System , and delete, or just rename "Window.png"

- Maps: I've slightly changed the upper map of Veisen ( the one connecting to the church area and the graveyard), I've also added some animals around Veisen, like cats walking around, birds flying from roof to roof and such, and smokes coming out of chimneys; this should make the city a little more "lively" I hope ^.^

- To fix a little "plot hole", I've added a few sentences to the dialogue between Pheles and Nicci at the Capital's gates, where Nicci explains why the citizens of Veisen won't recognize her, even if the nun she's possessing was trained there.

- Added a standing picture of Kristy, a new succubus!

- I've added the first chain event for Kreiss, for a total of 14 images! + another interaction with him, with a different standing picture.

- I've added the first Juliette's event, with three variants, for a total of 12 images!

- I've added the first Theresa's event, with three variants, for a total of 12 images!

- Of course, all those events have additional sprites!

- Thanks to Hoboy for the usual great work at proofreaing the game!

Well, I played the 1st chapter and I enjoyed it much. This part is short, but promissing. I was a little bit confused about the quest window - I didn't know how to use it and I think I messed something up in there, until I was able, to switch my quests to active, again. Regarding Emily: I wonder if she'll get quests? I didn't see any for her. I also was sad about the small amount of transformations so far, but that's caused by the early version.

The writing is good so far. Only some little mistakes in the grammar and some missing characters in some words -> map names, when you enter a new zone in the new village for example.

It's a little bit funny, but also annoying to see Nici's boobs jumping each time, when her character model appaers. ;)

I hope, this game will grow bigger than it's previous part.

Being a fan of the Chapter 1, I love to see the sequel coming up. I hope to see MORE (waaaaaay more) MTF transformations, and hopefully, some MM interaction.

So far, I loved what I saw in the game. "Must have" for those who liked the first and the "Village of Nightmare" kind of games.