Dawn of Corruption
by Sombreve 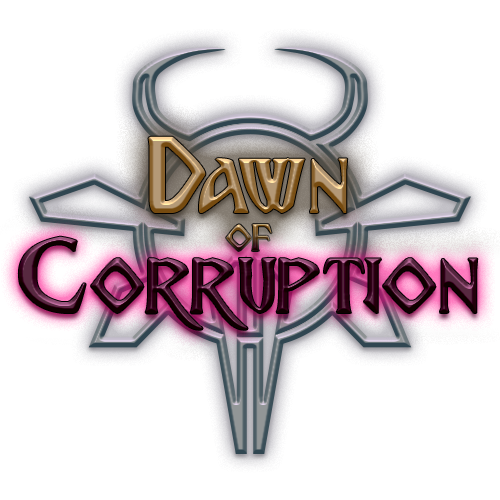 Dawn of Corruption is a Dark Fantasy NSFW RPG.

Warning, this game is nsfw 18+ only.
It features male gay characters and fetishes such as:
Muscle Growth, Macro, Hyper, Goo, Transformation, Corruption

Corruption is taking over everything in Tyem, and even death can't clean the taint clutching at the soul of its people.

The world will fall, there is no question about that. But where will you be once it does?

Features:
Balls Size is now tracked as a measurable stat.
Added new generator for cock growth descriptions based on your current cock size.
Added unlockable ranks to most abilities on Level Up, ranking up an ability will make it more effective (Some abilities can be transformed upon reaching its max rank)

UI:
Standardised text spacing in combat
Added Icons in fight text to indicate abilities
Verse Name added to sidebar
Added colour to damage numbers, heal numbers and enemy status on the fight screen
Added grades and categories to abilities in level up screen
Add sidebar description of what verse the cycle is in
Added km and miles measurement for sizes

Balancing:
Muscle is now capped at 999999999.
Size values now capped at 189393 miles.
Add stat passive to naga who stole your size
The Lost Entity now has the Never-ending Growth Ability

Story:
Added new room in the Nyx dungeon featuring a new NPC...
Remake of the Lost Werewolf encounter with all new writing (Thanks Taerus). They are now a generated Lost based on available races and have unique win passages based on your corruption and size.
Added content for your home that adapts to your size.
Added mirror inside your home to describe your appearance.

Features:
Taerus created a text generator to adapt content based on the many changes that can occur to your character. This includes unique growth segments based on your current size, passages being altered based on your corruption and descriptions considering if your character has certain limbs. (And this is just the beginning, thanks again Taerus)
Added selectable races at the start of the game using Taerus's tech. You can choose between Human, Minotaur, Dragonborn and Behemoth.
The demon transformation from Lakkos's encounter feeds that system as well.
Encounters in the Barrens are now split into two areas based on their difficulty.
Completely removed the level cap, levels are now set to a 5000XP requirement after level 10.
Added "Oath of Containment" and "Oathbreaker" passive abilities.
Added "Unstoppable Expansion" Perk, unlockable at level 10.
Equipped "Unstoppable Expansion" Perk to the Imp.
Added animated title drop when starting the game
Added Taerus as a co-creator in the credits :3
Your eye colour is now based on the colour of your companion.

Bugfixes:
Fixed an issue with fight hotkeys being usable on unavailable Fight Moves
Stopped the imp from learning inspect. He became rather obsessive about it.
Fixed an issue with using a hotkey further than any fight skills you had triggering exceptions
Fixed a bug with enemies using skills without considering their cooldown
Fixed the "Stunned" fight card not using any visuals

UI:
-Ghost remade the UI for the borders and icons released in 0.3.0!
-They also made new UI for the sidebar and every Fight Skills type!
-Every UI still changes dynamically based on corruption~

Features:
-Added a hotkey system for fight. Pressing the key displayed next to the Fight Skill's name will select it.
-Added delicious Baguettes.

Writing:
-WIP: polished parts of the intro based on suggestions by Augwult, Korboryn and Taerus!

Fixes:
-Fixed an issue with the parasite's height not being set correctly.
-The Sigil of Perception now says it increases critical hit chance instead of accuracy.
-Added preparation text on all Sigil moves for when an enemy uses them.
-Fixed an issue where tooltips would be printed behind stat bars.
-Fixed a misleading passage for when you lost against the Lost Naga and were too small to lose anymore size.
-Added a 1px border around the font to make it easier to read.

Part 1 of the Nyx dungeon
-Navigating this area becomes much different if you reach great height and/or corruption
-Contains a new encounter with a Nyx Parasite with unique attacks!
-You can get infected by the parasite, changing some aspects of your character and some interactions...

New UI pass.
-Massive thank you for the UI art done by the amazing Ghost ( https://www.furaffinity.net/user/ghostboy/ ) !!!
-The UI also adapts dynamically as you get more and more corrupted

Misc
-Added a new "Inspect" Fight Move that gives information about the enemy you're fighting.
-Added passive abilities to each enemies
-Lakkos now gets a stat upgrade with every demon tf.

Release notes 0.2.1:
-Added the Lost Naga as a new random encounter. (Written by Jagaz https://www.furaffinity.net/user/jagaz )
-Comes with a new Hypnosis move he can use in fight.
-Will apply a persistent debuff if you lose against him.
-If you beat him with this debuff... You'll gain more strength than what you've lost.

-Added a cooldown mechanic to some fight skills
-Replaced the Accuracy stat with a Critical Hit Chance stat
-Rebalanced every fight in the game with those new mechanics
-Tweaked the Fight UI to display unusable fight skills.
-Added a tooltip on disabled fight skills that shows the reason why a skill is unusable
-Fixed a typo for the corruption gained in the Lost Werewolf scenes
-Fixed an issue with the sigil of perception removing other fight modifiers
-Nerfed the Minotaur Guard's hp stat slightly.
-Added a credits page in the main menu!

-Added the Lost Werewolf as a new encounter
-Has a unique move that stuns if his target has 50+ arousal.
-Has a unique intro, win and loss scenarios.
-There's an extra scene with him for those who reached 25+ corruption upon beating him.

-Massive edits to the writing for all encounters, the intro and the main quest
-Added a tech that smoothly evens out future cock and body growth in case one of them becomes much bigger than the other.
-Added support for save files updates! (With the saves of this version onward, I can upgrade them if you use them in a newer version of the game.)
-Added Yellow and Brown as symbiote colours
-Lakkos, Tok, Imp and Werewolf encounters now have variations in their intros based on things you've accomplished.
-You now gain special perks based on how bigger than your opponent you are.
-Unlocks "Stomp" Fight Move when you are much bigger than your opponent

-Fixed an issue where growth would not be applied permanently to enemies during fight.
-Fixed a bug with the Imp being able to learn 'special' fight moves (surrender and do nothing)
-Fixed some growth not being applied at the right timing in the Lakkos encounter
-Fixed an issue with Lakko's growing more than expected in the final demon tf.
-Fixed an issue with the masochism abilities always granting the maximum possible arousal per attack.

This is pretty fun. I like the corruption themes. The English is occasionally shaky ("sensible" vs "sensitive") but it's serviceable.

Great start to a game, hope to see more of it.

A good start to an M/M Game.  Lots of hot corruption and expansion.  It's still in a very early state though and is a bit grindy as you fight your way through the wastelands with a few balance issues still to be resolved.  (I'm 2 meters tall with a 3 meter long cock.. Wut?)

I strongly recomend trying it though.

I'm always up for good m/m action, and this one just hits the sexy, hunky, doods fucking each other's brains out in a pretty way. Plus all the description of fluids is another thing I enjoy.

Currently, it's a thirty-minute play at the maximum, but has potential. And given the themes of the game, growing is something with its own perks. Perhaps the difficulty curve is a bit low, making parts of it a breeze, but all in all, I found the 'grind' to be not too much.

Would recommend if you're into muscled guys being guys and taking what they want from who they want.