The Six Islands of Potentia
by ada shu 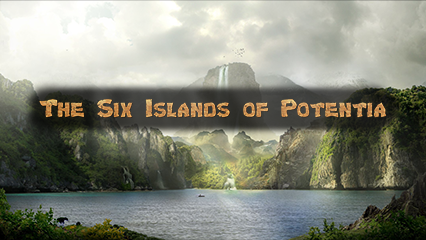 You wake up in mysterious surroundings with no memory of your past, you must brave a new world if you are to have a future.

It's eat or be eaten as you explore a tropical archipelago full of strange creatures, alluring temptations, and ancient secrets.

Fight for dominance, gather resources to craft improvements, hold onto your sanity, and discover the truth before it discovers you!

--Combat--
Combat reworked, a lot of rolls added to vary weapon damage/crits/effects.
Enemy special attacks have been buffed and can cause status effects.
New status effects: Poison (armor ignoring damage taken/turn) and Stun (skips turn).
Loot drops have been increased and there is a chance for rarer drops.
Combat trigger changed to prevent simultaneous battles overwhelming you.
Overall combat is much harder, to compensate there are now equipment unlocks.
Leveling up has been tested (checked during sleep), bonus perks coming soon.
2 new enemies added, snek and squeak.
Added/improved a lot of flavor text.

--Other--
2265 more words of content added.
Hideout UI has been greatly improved.
Lots of icons added for new crafting and effects.
Your fellow survivor now defaults to foraging.
Hideout NPCs have descriptions and things to chat about.
Added daily update on campsite activities.
Added game tips to help with progression.
Water has been fiddled with some more.