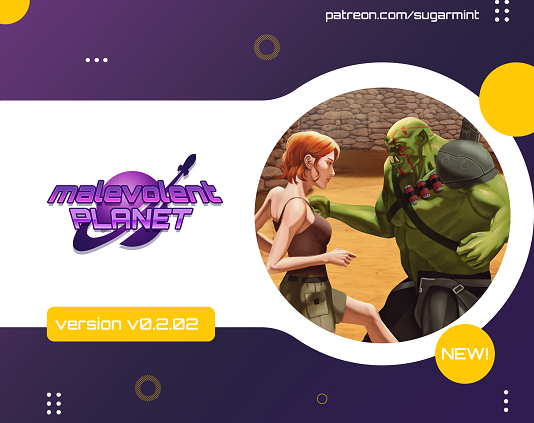 You are a female scientist on a special mission. Investigate an Earth-like planet far out in the Galaxy for its potential to sustain human life.

That's what they told you anyway. Beneath the honorable facade of the mission, lies a sinister research into a potentially dangerous, yet intriguing method of FTL travel.

After crashing on the alien planet, you face situations no training could have prepared you for. Perverse opportunities and indecent situations will uncover who you really are.

The choices are many, and it’s up to you whether you want to keep your innocence or give into the tempting desires of this Malevolent Planet.

Screenshots from the game can be found here.

Instructions:
If you want to play offline, on PC:
Online:
Changelog:

This game is hosted on the TFGamesSite via. the Hypnopics Collective. Visit my game thread at Hypnopics as well.

The main character is the female protagonist. Other characters are the ones in your crew so far and many more will come soon as you explore more of the planet in future iterations.

UPDATE: fixed typos, corrected the usage of the comma a bit and fixed a mistake caused by the lack of a default expression and it was showing the icon that some image is missing.

Here's the question.  Do I review the game as it is or do I review it as a TF game?

Let's start with it as a TF game.  There really isn't much there, yet.  It's built as an MC/Corruption game, but while there's quite a bit that leans in that direction, nothing outside of what happens to some NPC's early in the game really enforces that.  All of the events that occur to the PC don't seem to have any real effect other than whether you get certain scenes or not.  The story and later choices don't seem affected at all.


However, as a sci-fi/sex game, its quite good.  There's plenty of current content and it seems a lot more is in the offing.  It's well written and the story is interesting.  The only thing that bugs me is the game gives you the option to customize the PC, but the artwork for the scenes only show the default look, so what's the point?  Obviously, you can't create images for every possibile combination of features, so I'd advise simply removing the feature  unless there's a plan in the future to use layering.  There are a lot of characters that have potential,but at this point need fleshing out a bit.  They do have distinct personalities.  I do like that the aliens have avoided the "planet of hats" trope.

I was reluntant to give it a try for some time, but seeing though several updates have passed and there should be content to be had I gave it a try and am PLEASED I DID. Though not a gender bender it does have a fun player personality type transformation that I have been finding fun.

this one become pleasing to the eye

its not a sarcasm it simply not pushing its intended genre