Abyss Cave
by Saltyjustice (2 more by this author), Toka

Disclaimer: I (Salty) am not the developer, I am posting the game with permission from the developer. His twitter is below - give him some likes and retweets!

Abyss Cave
Three sisters, Fresia, Zephyr, and Lupine are in debt for 1,000,000G after blowing up a rented alchemy shop. They need money - fast.
The guild has found a mysterious cave where only women may enter, and the monsters within have ingredients worth a fortune.
Go into the cave, delve its depths, fight its enemies. Don't trip up, or you may become a permanent addition to the cave's features...

Originally released in 2019, version 2.0 of Abyss Cave has now been translated to English! The twitter of Toka, the developer, can be found here.

The game focuses on petrification and other 'hardening' states. These include petrification, freezing, wax, gold, chocolate, toy, and milk-covered, among others.

The combat is RPG-Maker flair. Your goal is to defeat the enemies using spear, knife, or magical damage. All enemies are weak to one and strong to another type. Enemies will bombard your party and attempt to harden them, and if everyone is petrified, you lose. 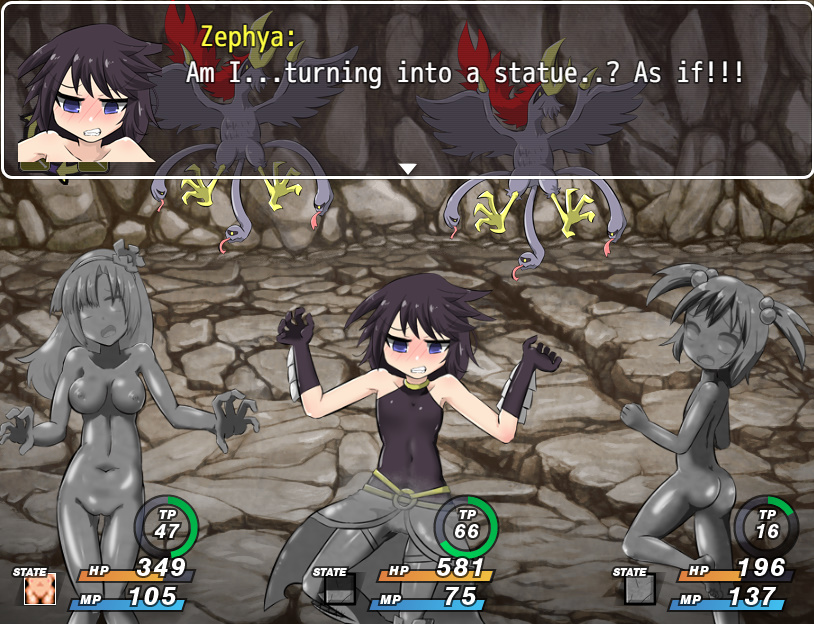 Looks and sounds interesting, sadly I am not very much into petrification, but for people liking that genre it could be awesome! :)

The game itself is ok

the game feeling is so so

a fairly decent game, the battle curve without the cheat weapon can be steep. The Focus of Petrification and Unrination is detering me peraonslly. more varied transformations would be appreciated, like the girls turning into Succubi or something like that.