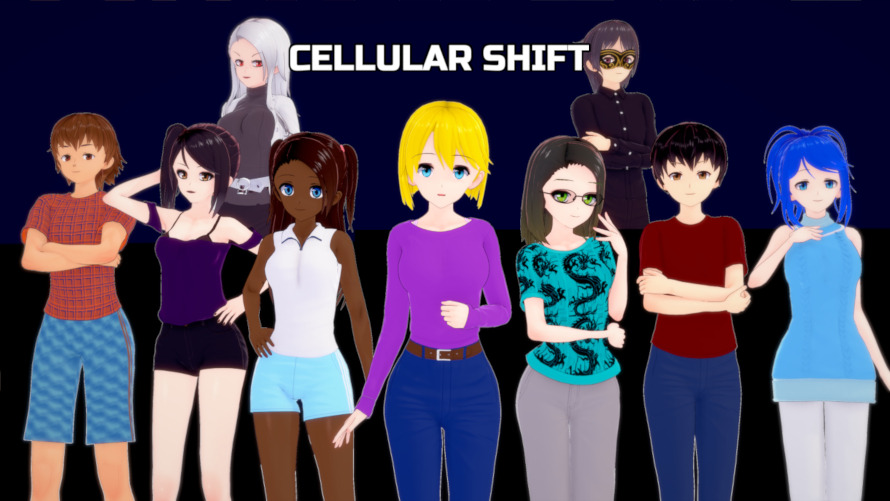 In Cellular Shift, a sci-fi/romance/crime Visual Novel filled with nudity, sex, drama, and humor, you play as Riley Weston, a young man who tries an experimental serum developed by his friend Jill, and inadvertently ends up turning into a girl. Riley and his friends quickly begin to accept the change, but little do they know, there are strange, nefarious forces at work in the shadows, and events already set in motion that none of them could've predicted, including a mysterious scientist and her loyal right-hand with twisted motives that threaten more than just Riley's life...

Version 0.5.1 is now available to public!

*This version fixes a few bugs*

Check out my Patreon: https://www.patreon.com/patternonthepants

*You are made to pick a romance target early, but I am planning harem options for future updates.

*Futa content is avoidable, but the Futa characters are still fairly prevalent in the story.*

*Game currently contains two female characters who become futas; their h-scenes are skippable/censorable, but the characters are still fairly prominent.

You start off with the option to end up with one of three characters, with more options to come down the road:

There's Jill, your cute, glasses-wearing genius/scientist friend (who you've had a crush on for a while), who gives you an experimental serum intended for pain, which ends up triggering the transformation. A bit of an oddball, but she really cares about you.

Raven, an athletic girl who goes to your college, and has more than a bit of a wild side. After a couple of encounters, you begin to become friends with her, with the possibility for more. She's very open, and blunt, but has a heart of gold.

Max, your goofy best friend since a young age. He's a handsome young man about your age, who's always been there for you throughout the years. You never had feelings for him before as a guy, but with the transformation, something has changed...

More options with other characters are starting to become available!

- One full day in game, clocking in at nearly 800 new renders/images along all paths

- New choices, inlcuding the first couple of harem options with Raven and Sam (*As before, anything with Sam in that regard requires choosing all of his options, starting from flirting in the gym. Raven's harem option is available if you had had sex with her twice, after the new scene.)

- Various tweaks and fixes, including all changes from previous update

I hope you will all enjoy the new update! **See below for scene list**

Pattern On The Pants

- During this update, you will be presented with a choice to turn Riley into a Futanari. You have the option to say yes or no.

- Story Progression; This update introduces some new major story bits, as well as starting to bring in more morality-type choices into the game

- Technical; *In new scenes that involve dicks, I have included new options for how to finish (outside or in), with the exception of one.

I have listed the new h-scenes below as well, but I thought I might separate them in case you want to be surprised by them.

I hope you will all enjoy the new update! Regards,

Pattern On The Pants *scroll down for h-scene list*

NEW SCENES (Separated, in case you want them to be surprise):

- Split options with Clara; 1 new Female/Female scene (BJ, HJ), and 1 Futa/Futa scene (BJ, Frotting) **If you rejected Clara on Day 8, you not get this option at all.

- New h-scene with Riley & Raven, obtainable down any romantic path! (Automatic on her path, but choice on the others)

-Added in feature to skip or censor Futanari scenes. No other new content in this build.

- 2 Scenes with side characters; one with Sam (pick all his options for this), and one that involves Riley and a Futa (choice)

- Fixed a couple of reported typos

Really positively surprised by this. Like the previous review said, the choices are few and far between, but it's not actually only 3, that was hyperbolic. There is a decent amount of content so short after release. Personally I can whole heartedly recommend it. The story and characters make it for me.

This is not a game. It's a VN with like, 3 "choices", in order to call it a, "game,"  If you want an actual game, look elsewhere.  If you're a fan of VN that pretend to be games and lead you to believe your choices mean anything at all, when in all actuality, they don't...this is it for you.  Not a game. A VN that pretends to be a game so it can be posted on game sites.  Do not waste you're time if your expecting a game.

It's an odd game. I'd say it's less of a TG visual novel, and more of a visual novel that happens to have a TG in it. The actual TG happens very quickly and is brushed past in short order by the plot and the characters.

While the change is technically involentary, the MC adapts to it so quickly that can literally enter a M/F relationship within 2 days of it happening, and is happy to go along with any "girly" activity as they come up, up to and including entering a volunteer stripping show. Another female character is actually much more timid about wearing a revealing bikini than the (I stress again recently) TG'd MC. I know this is probably a personal taste thing, I just want to let others know that this game doesn't feature any kind of struggle to adapt, in case that's what you're looking for.

The other issue with it is that it kind of undercuts the TG parts of this story, leaving it with just the crime/intrigue story, which doesn't really stand up on it's own. It's kinda generic, and we really aren't given much to go on despite frequent cutaways to other characters. No real stakes have been established, so it's kind of hard to care about it. There is a tenous link to the main cast, but it goes unconfirmed, at least in this version.

There is one other story issue that irks me, albeit minorly. Everyone seems to know everyone else. It's a bit of a copout, and ends up making the world seem really small.

Ultimately, this is a game with vestigial and kinda underutilized TG elements, and an intrigue plot that just didn't grab me. Might be worth checking out once the intrigue plot is more developed, but don't bother playing it for the TG elements.

It's early, but it has a lot of potential for the future. You already mentioend futa content, having that might turn this game from a simple love/myster/sex game into something with a lot of comedy and has potential avenues that feed off of that: pregnancy, fetishes, embarrassing situations etc.

The artwork grew on me, it's a little rough at times but it's also not so bad. I'd love some more definition to the bodies in the form of hair and aeriola but that's alright down the road. I like 3d renders more, but this is one of the better designed 2d art games on here. Congratulations, you did a great job.

Very good story, aside from treating the main char POV as it is, there are plenty of stories playing it the background (scenes you get the see as a player, or information you get while the main is watching the news) that that seem to interweave with the main characters circle of friends in ways that make his life seem a lot more interesting as it might seem to be in the bit of slicey of life kind of style the story starts.

Characters so far a quite worked out in both looks and scenery too. I like the assets used, even if they are borrowed from other games. I prefer these much over a lot of the 3d renderers you see a lot lately on this site that make people look weird at best. But that could just be my personal preference as wel.