BMO TV is a game about a bimbofication reality tv show in the likes of Stranded, Bimbo House, etc. Instead of their predecessors, BMO TV is a completely visual point-and-click adventure.

The player takes control of a new contestant entering the show and has to eliminate all other contestants before they eliminate him/her. You have to interact with the audience of the show in order to gain votes and use those votes to buy items that might help you with eliminating the other contestants. 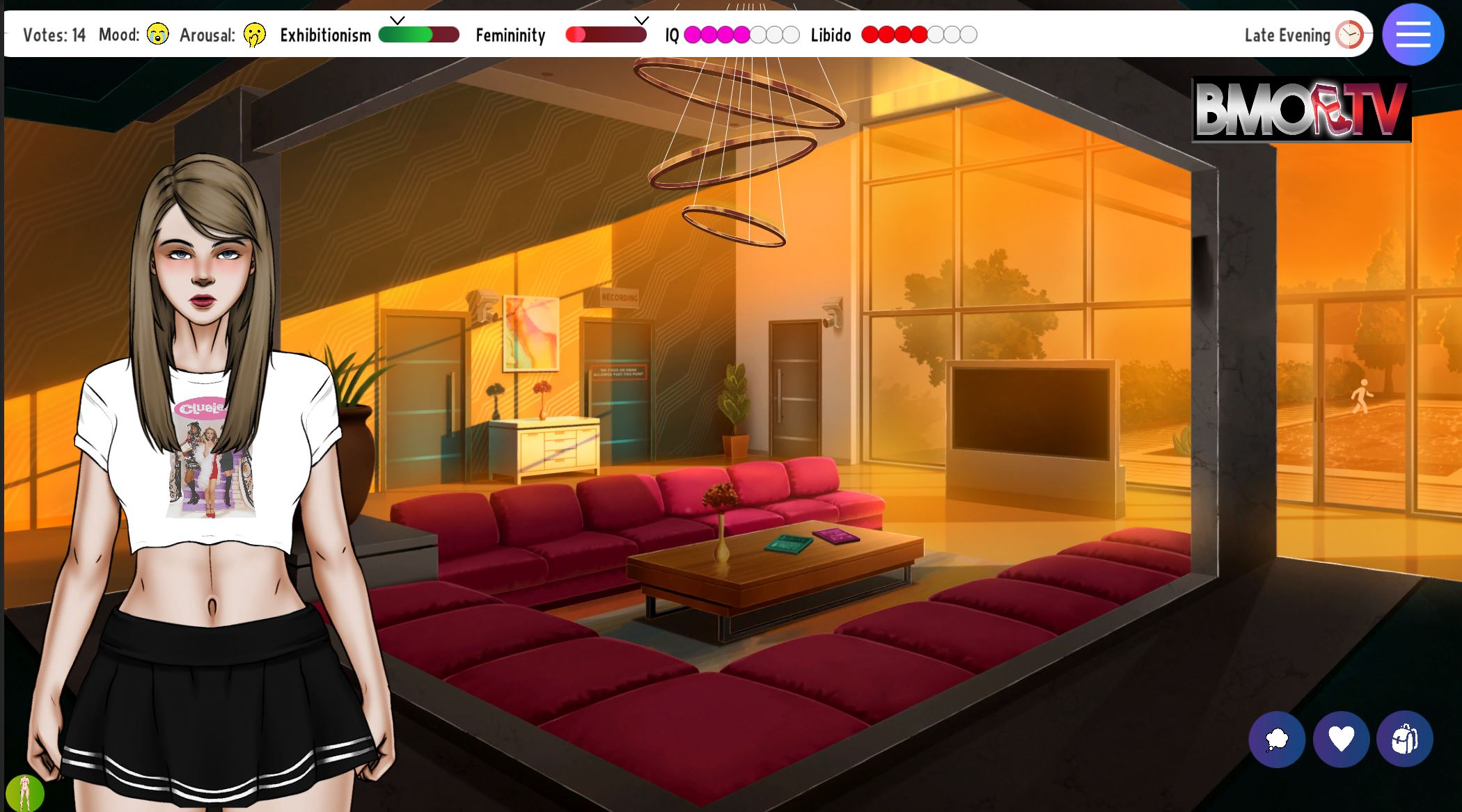 (Example of the new graphical representation)

This game had been in development before but was discontinued a while ago because I didn't find an artist. Since then the game has been completely rebuilt from the ground up, which is why it is on a new database page. It has a completely new graphical system, which is ready for all of the art to be slowly replaced over the next year. The character-building system is completely modular with nicely drawn graphics from our great new artist. They will have a lot of work to do. Please consider supporting Patreon to get more graphics financed. The only thing that's hidden in the free version is the nudity when the character takes off clothes right now. New versions will be first on Patreon for a few weeks as is usual on this site.

I hope you all enjoy this remake of the game and are ready to tell me your honest feedback in the discussions thread. The game is absolutely not finished yet! There's tons of work. It was also not yet balanced, but there are some tools in the options menu that you can use to try to help balance it. Tell me what settings you used.

Spoilers: Check out the roadmap in the main menu for more information on what's to come. A lot of different fetishes will be present and the story will get a lot more clear. For now, it is mostly a sandbox with a few story bits, but the plan is to have two main storylines - one where you destroy the other contestants and therefore become Erica's slave and one where you fight back and have to make the other contestants your allies while Erica tries to corrupt all of you at the same time. 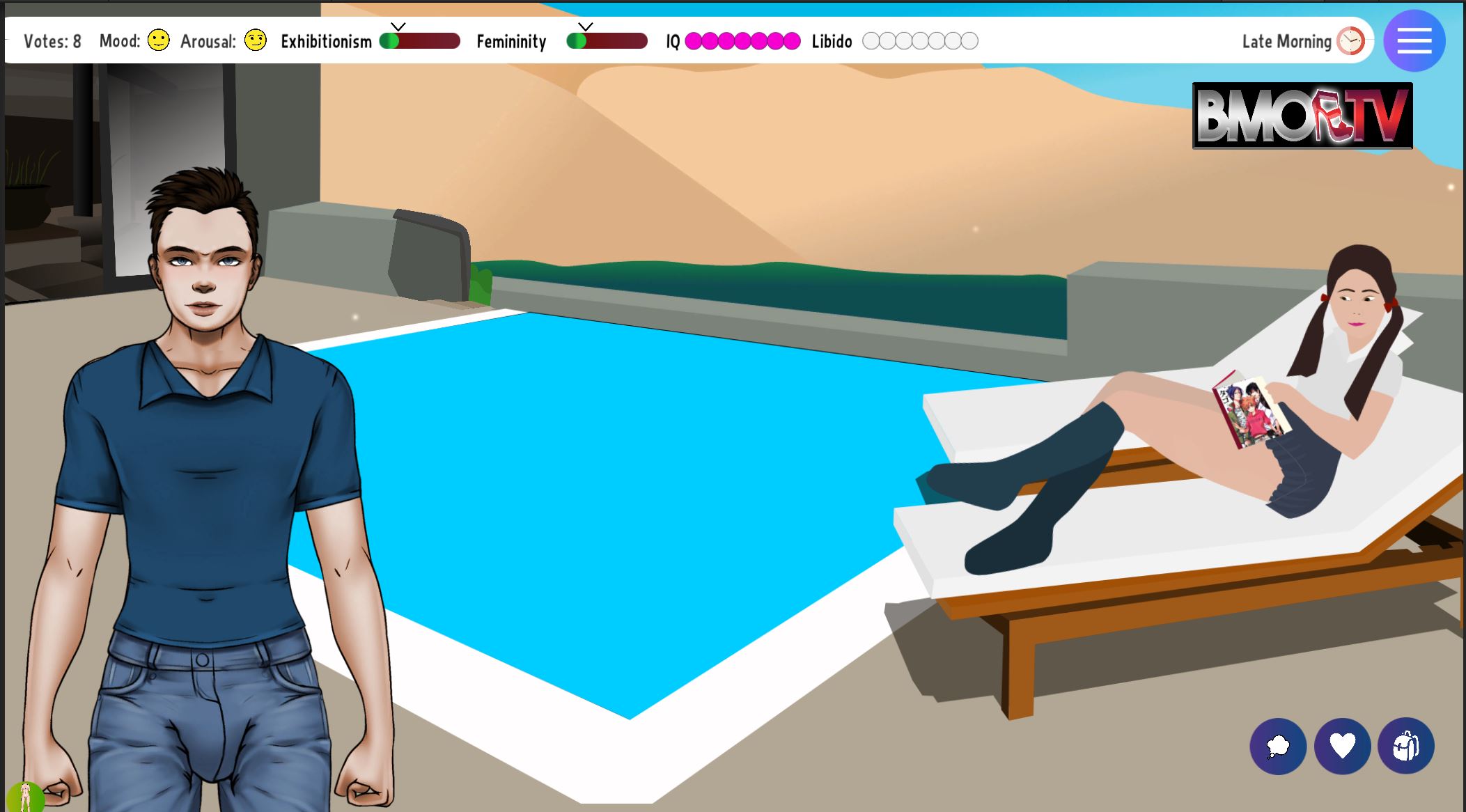 (These old graphics will slowly be replaced.) 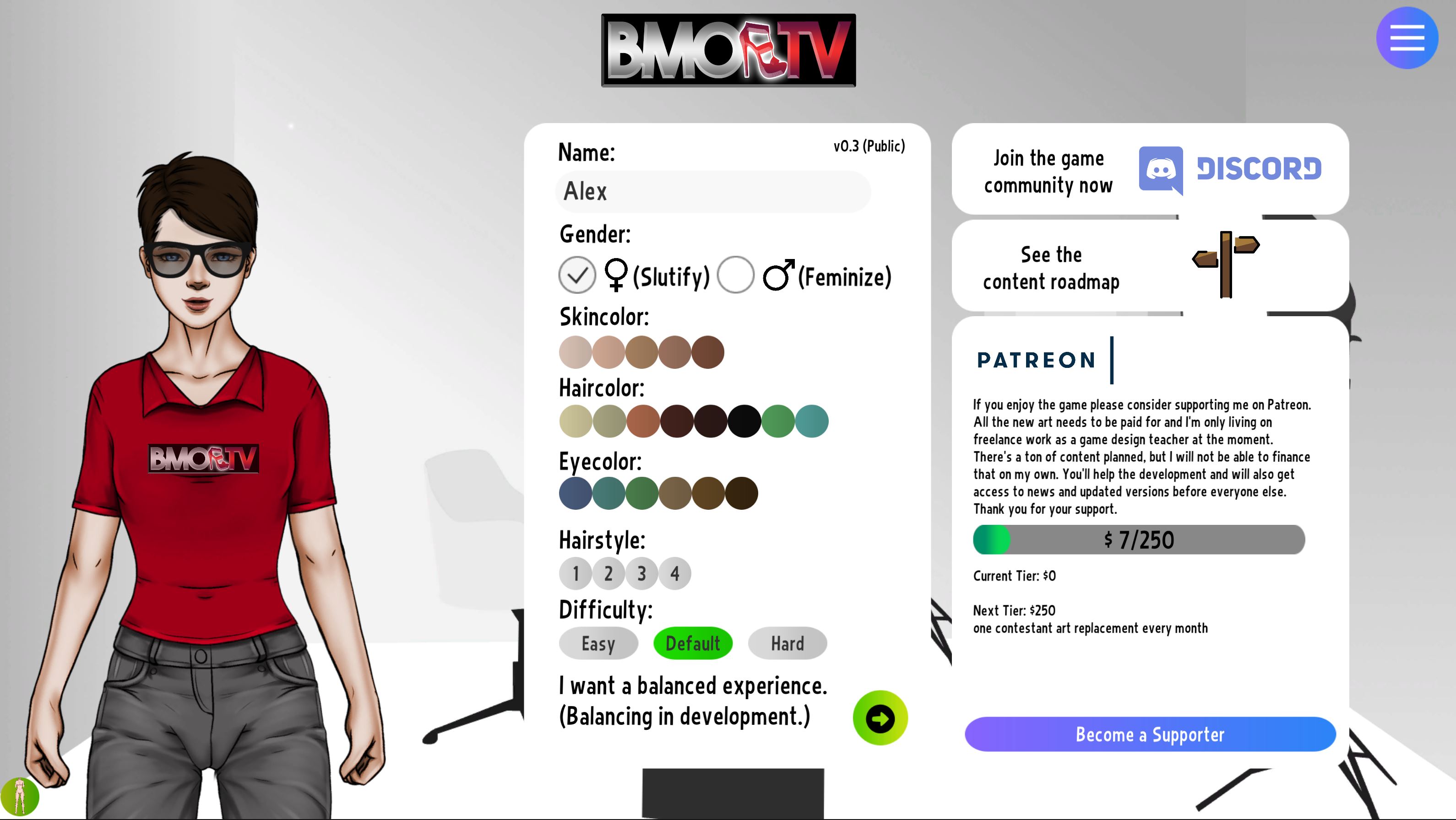 (The character builder allows for a lot of options.)

MAC USERS: Here's a tip from the forum by phaos0:
The actual problem seems to be with the default archive utility, it doesn't seem to unzip it correctly. You can actually even kinda see this happen, the utility will do some weird stuff halfway through or so. Using Keka I'm able to unarchive it and play just fine. 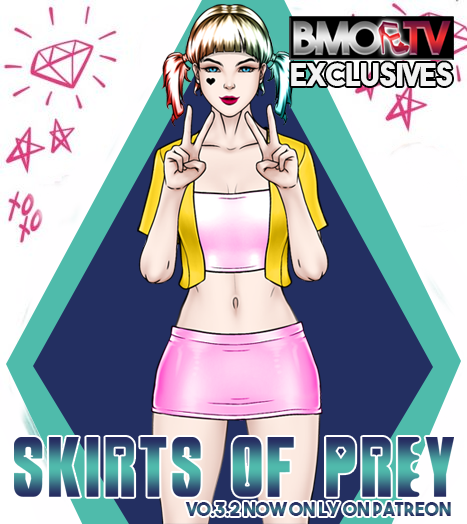 - fixed a bug that made the rash itch when naked

- changed some Katelyn and Himari Dialogs after weekly shows

Main
- Asian Schoolgirl Path will now start three days after initial Himari Stamp conversation if the stamp has not been given to Himari
- Asian Prostitution Path will now start when asking Himari for sexual favours for finding the Hanko Stamp (Path not finished)
- During Schoolgirl Path, don't stop facial tfs completely, only for eyes
- Schoolgirl Path now only has one treshhold for hairlength, the other states will immediately increase, so it is much faster to game over
- During the Schoolgirl Path all Attacks will be done by Himari, choosing only tfs fitting to the path, e.g. hair extension during hair phase
- Added all days of second Himari path (thai prostitute)
- Added system for addictions
- Added animation for drooling
- Added item that stops drooling in shop
- Added graphics for longer pigtails
- Added texts to masturbation scene
- Added new graphics to Abigail living room scene
- Added ability for player to choose what TF to apply next (only for Abigail) (result can only be seen in the Evening when she is in the living room for now)

Systems
- added vanity for makeup application in Bedroom
- when exhibitionism goes up, the character will sit on the vanity to apply makeup
- makeup has min and max values based on exhibitionism
- added bimbo/sluttiness score to popularity popup
- bimbo & sluttiness scores added to sexappeal calculation
- added compulsion events that make the character run back to the bedroom if your mind and visual representation are too far apart from each other (exhibitionismclothes, iqbimbo score, libidosluttiness score
- added arousal tipping point (>50) above which the character should get more aroused by being in the same room as the other contestants if they have been transformed at least once before
- added spontaneous orgasms if arousal > 75, which will lead to being attacked by Erica if it happens outside your Bedroom
- changed longer hair to be behind character instead of in front
- one potion/syringe per tf at vending machine (you can only use one potion per day, but as many syringes as you want): GROW+ for body up, DUM+ for iq down, SKIN+ for exhibitionism up, SKIN- for exhibitionism down, GROW- for body down, DUM- for iq up, RISE+ for height up, RISE- for height down, ELONG+ for hairlength up, ELONG- for hairlength down, rash lotion, HEAT+ for libido up, HEAT- for libido down, FEM+ for femininity up, FEM- for femininity down, GIRTH+ for penis growth, GIRTH- for penis shrink
- new character art for Abigail in Living Room
- new tf choices when attacking Abigail, that will be represented in her Living Room art

Quality of Life:
- added settings for reduced hypnosis visuals
- added starting dialog to choose hypnosis visual settings
- added morning dialog to choose hypnosis settings for old savegames
- added Help-Button to highlight all interactable objects in the room
- added message for Patreon charging at the beginning of each month in menu
- added a message about the game versions only being available starting with the $5 Patreon tier
- added a changing booth to the pool
- added an invisible layer outside of most popup windows that closes the window when clicked on (Shops, Vanity, Inventory, Affection Window)

v0.3.0.10
- added the ability to fast-travel with map-object
- raised price of map object to 40
- fixed contestant positions on map
- trying a new stat visualization for: RashExhitibionism and BodyFemininity
- added explanation for current states of RashExhibitionism and BodyFemininity
- changed the way how contestants choose what tf to do
- fixed room tint sometimes not resetting to daylight correctly

v0.3.0.8
- fixed small penis sizes growing back to large as soon as they are supposed to shrink
- added several morning messages to different penis transformation stages
- fixed some typos send in by blahblah2019 - thank you!
- fixed Abigail grins awkwardly repeated twice
- fixed votes from disqualified contestants not showing up immediately

v0.3.0.6
- removed schoolgirl outfit from store
- fixed hair on schoolgirl route not growing out to the needed length
- fixed patreon amount bar to work for amounts past $1,000 you pepople are crazy :)
- saving volume slider value on device
- increased maximum fitness to 100
- changed Katelyns interactions based on new fitness values
- fixed some things with the height transformation
- fixed facial transformations not narrated correctly
- fixed facial transformations happening on next morning not saved correctly
- fixed drool transformation not happening sometimes
- fixed makeup color not showing. it will now show up on high libido characters automatically as was originally intended for this version (makeup system will be replaced in v0.3.1.0)
- added a readme to Mac version with tips how to get the game to start from the forum
- added a sensory warning to beginning of game

fixed some bugs and added some clarification to mechanics

- mood effector system: events will impact the mood over a period of time

- clothes can now be worn in a wardrobe system

- clothes will massively affect your mood

- the IQ score directly affects the hair color, depending on what color you chose at the character creation

- taking control of contestants gives you a popularity boost

- bad end only happens for a score reaching max if all scores that are connected reach max as well (This system will be completely overhauled at some point when the main story progressions are further along.)

- for female characters, there's an eyesight transformation and they will start with glasses, not being able to see without them

- added the Introduction to Erica, the fourth contestant (no way to take control yet)

- Calming Tea has been removed from the vending machine

- contestants can now sometimes comment on the player's transformation state

This game is really very good, and has been improving and inserting new content in an amazing way.
Congratulations to the creators, it is a game that runs away from traditionalism and has a legal motivation, with innovative content.
You just won another Patreon supporter.

The game has a few issues:

I tried to take the hint to user the sticker on the magazines, but evidently I did it at the wrong time or place and then got ganged up on. It felt like there should have been some sort of tutorial here on how to use everything. You basically work for 10-15 minutes to get through the very first part of the game and save up enough points for an item and then you lose it and the idea of trying to save up enough points to get another one is just depressing. The tempo here is just all wrong.

It's not a bad game in the sense that there aren't any bugs that I've seen and what's there at least feels finished. But like the reviewer below me I just lost interest before long simply because accumulating the currency to buy items takes Such. A. Long. Time. You're constantly repeating the same actions over and over and over again while the votes counter crawls up at an excruciatingly slow pace and after enough of that I just gave up, it wasn't worth my time to sit through that tedium.

This could be a decently fine game with some tuning but as it is now it's just boring.

It's certainly an improvement from before, no longer just a significantly worse Unity version of Stranded.  The frustrating RNG garbage is gone and replaced with QTE trap events.  However the core gameplay loop is still very repetitive and boring.  With no events to speak of you just click on the exact same objects every day, and slowly accumulate the points you need to buy the victory items.  With Stranded this wasn't as bad because the simple UI and shorter days made it very quick to progress, but here it feels like it takes forever to buy anything and I just lost interest before finishing it.  Also, as another reviewer said, I'm not a fan of seizure-wall hypno scenes.

I loved the idea behind the original but couldn't get past the art. Glad the game is getting reworked with new and much improved art. Can't wait to see how it goes. :)